From what I can tell the choice of car does not influence driving speed or handling and is mostly of aesthetic nature, but are all cars really completely equal when it comes to gameplay?

There is a slight difference in hit boxes (official source), but apart from that there isn’t supposed to be any difference between cars.

Some players report other differences though, that may show up when powersliding in a circle (for example).

Regarding how the difference affects the game on the pitch is tricky to say, but having a slightly lower or higher hitbox would affect the angle with which a hit ball flies (so it may be the difference between scoring a goal on the kickoff or hitting the top bar). If there is considerable size difference, a bigger car may be better for a goalie position.

Update: A user on the Psyonix forums has tested a number of different characteristics of all the cars and has noticed a couple of differences beyond the hitboxes. The tests and videos are available in the forum post, and his results are summed up in a spreadsheet.

To sum it up, the following things were shown to vary between cars:

He also debunked some myths and showed that the following things probably do not differ between cars (or differ so little it cannot be fully distinguished):

It is likely that the devs are indeed speaking the truth about only having the hitboxes be different, and that the turning differences come from the steering model used. According to another user on the Psyonix forums (I was unable to find the original quote), the devs have stated that the games uses Ackermann steering geometry (image below). 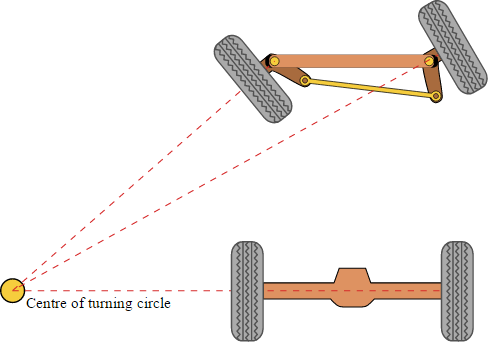 It seems feasible that the wheel placement and car size would affect the car’s turning characteristics (perhaps someone with more knowledge of vehicular matters could enlighten us as to how longer wheel axes (wider car) or greater distance between the two axes (longer car and/or wheels closer to front and back) affect the turn radius).