I have recently installed Rusty Hearts with the intention of trying it out, even though I’m not really an MMO person. Something in the game’s aesthetic just really appeals to me.

While the gameplay videos I’ve seen looked decent, the installation experience itself had me questioning the game’s credibility. The installer and subsequent launcher look slightly shady, with several suspicious windows popping up and disappearing.

When I finally got to launching the actual game, I suddenly saw the following icon before the game went full-screen: 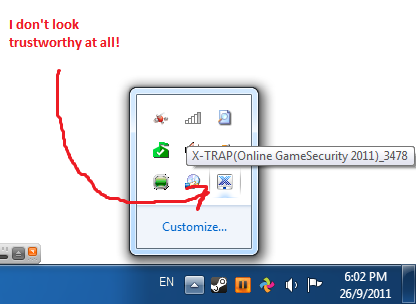 Snooping around online, I discovered that this is some sort of cheat-prevention module called X-Trap, that is aimed to detect the following, amongst other things:

While I understand why cheat prevention is important in such games, my instincts are to be highly suspicious of this module. This is exacerbated by the fact that I can’t seem to find any official information about it.

So my question is, can I trust X-Trap not to:

NOTE: I have not actually tried running X-Trap on my system – I looked it up while downloading the game, and canceled the download when I learned of this.

I found this thread at the official forums, and apparently, programs like these can intefere with your ability to play the game:

Additionally, X-Trap requires administrative privileges, even to just run, which is a big no-no by today’s standards.

I don’t think X-Trap is malicious, and I understand why the developers feel the need for a system like this, but I consider it far too aggressive and invasive, more so because I have one of those Logitech keyboards. That’s a shame, because I too want to try the game – but IMO, no game is worth dealing with that kind of problems.