I’ve read the OpenTTD wiki page for a few times, but I don’t really get it very well.

I usually use the 4th and 6th, but I’m not really sure what each of them does. And what are those things above the semaphores?

I have to note that I’m using signals a lot, but sometimes trains just get stuck and I fix it by randomly switching to other signals.

Can someone explain me train signals quick and easy?

Block Signals: These separate track parts into “blocks”, which can contain only a single train per block. These blocks can be as large as you want, or as small. For efficiency, you’ll want them roughly 10 blocks long. Less if the average train size is smaller.

Pre-signals need a bit of explanation before telling you how they work. They work like block signals, so they divide the track into blocks, but take their input from signals further down the line. They’re really meant for one-way tracks, so I wouldn’t recommend using them for two-way tracks. I’ll explain how they work, and then afterwards how you can use them in combination.

Entry Pre-Signals: These signals work in tandem with Exit Pre-Signals. They’re meant for one-way tracks that split into two or more paths. You place an Entry signal before the split. The closer you place it to the split, the less time the block will be in use.

Exit Pre-Signals: Place these after the track splits. One on each track. Ideally right after, to minimize the amount of time the block remains in use. They function exactly like Block Signals, and “reserve” the block after the signal for a single train. If the block is open, they display a green light/bar is up. 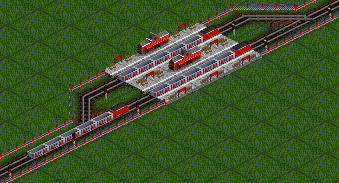 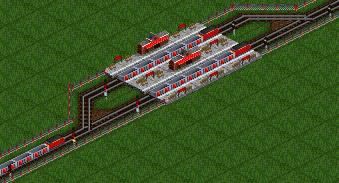 But if you use the Pre-Signals, the train waits before the split. That means as soon as either station track is clear, it can advance, and won’t necessarily wait for the bottom track. It’ll be first come, first serve.

Combo Pre-Signals: These work like both Entry and Exit Pre-Signals. They’re meant to be used if you have a large number of splits in a short area. You’d use an Entry before any of the splits happen, Exit Signals after all the splits are done, and Combos in between. This picture shows a good example of when to use Combo Pre-Signals: 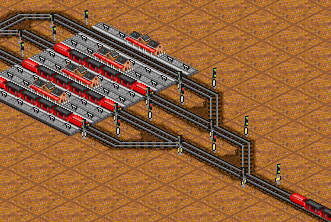 At one track, there’s an Entry Signal, getting it’s signal from the two Combo Signals right after it, and they, in turn, are getting their signals from each of their two Exit Signals. By layering it like this, the train is still held up before committing to any track that might cause it to rely on a train to leave the station.

Note that you can just use entry and exit pre-signals as well; remove the Combo signals, and it will function just the same. For the most part, there’s no real reason to use Combo Signals.

Path signals are exclusive to OpenTTD; they were never in Transport Tycoon Deluxe. What they do is allow a train to “reserve” a section of track before it gets to it. If it succeeds in reserving the track, it will use it, even if another train is inside the “block”. This picture does a pretty good job of explaining it: 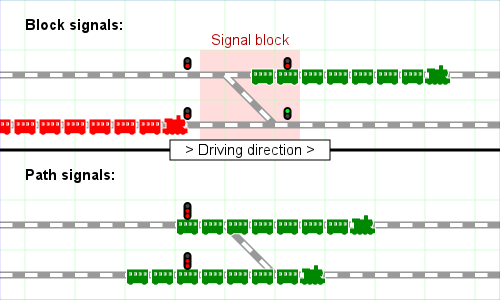 There are some more examples for path signals at the wiki you linked to. This is just meant as a general use reference.