The only ability which is listed anywhere for Alexander (Greece), other than the unique units, is that influence over city states is decreased at half rate and increased at double rate.

However, I’ve recently learned that additionally, Greek units cannot trespass on the territory of neutral city-states – here’s an image showing the description of this “trait” (this was taken at the beginning of the game, no special social policies and I just encountered this city-state): 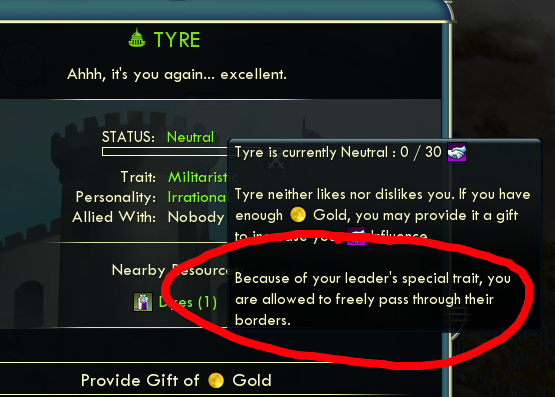 Does anyone know of any other, “hidden” traits, or can provide a link to anywhere which lists them?

This page has a number of interesting tidbits that aren’t easily discoverable, including the one you mentioned above about Greece. Nothing else about civ leader specific abilities though.

You can skip the intro movie by
hitting Escape; however, the game
loads data in the background while the
movie is playing, and therefore the
movie won’t actually stop until
background loading is complete.

To access predefined maps, such as the
Mesopotamia map that was part of some
special editions, choose Mods and then
Single Player. You can now select
among all installed maps by clicking
on the map button.

To show the movement range of a
selected unit and the path it would
take when ordered to move, either
press “M” or hold down the right mouse
button while moving the mouse cursor
over the map.

The maximum radius within which a city
can allocate workers is three hexagons
in any direction.

Marble speeds production of all
wonders by 25% in the city that works
the quarry.

Greece has the special ability that
moving units through the territory of
city states never degrades influence
with them.

Units count towards a supply limit
defined by your cities and population,
shown on the military overview. The
exact effect of reaching that limit is
unknown.

Units have a maintenance cost (aka
upkeep) in gold which depends on your
total number of units, and is
summarized in the economic overview.
The actual formula for unit
maintenance is as yet unknown, and may
or may not be related to the unit
supply limit.

If you have no gold left and are
running a deficit in excess of 5 GP
per turn, units will begin to be
forcibly disbanded to save on
maintenance costs.

Razing a city takes one turn per
population point, and begins only
after you end your turn. So if you
choose to raze a conquered city, you
can still enter the city screen and
cancel the razing. The city will then
be annexed — you cannot turn it into
a puppet state anymore.

Pacts of Cooperation make the AI
friendlier and more receptive to other
deals. Pacts of Secrecy against
another player do the same but with
the added condition that neither
player must cooperate with the target
player.

Being allied with a city state grants
you an automatic view of all tiles
they can see. There is no other form
of map trading; the only way to
explore a major civilization’s
territory is to sign Open Borders and
scout it with your units.

The manual once mentions that hotkeys
are documented in the readme file, but
they are actually listed in the manual
itself on page 207. You should still
have a look at the readme file (“Read
Me .pdf” in your Civ5
installation folder) as it has some
other useful information, such as the
location of the editable Civ5
initialization file.

Looking for the real-time clock?
Remember this is a Steam game — if
you have the misleadingly named “Steam
Community In-Game” enabled in your
Steam settings, you can simply hit
Shift+Tab and get a big fat clock in
the top-left corner, along with other
Steam UI.