When I was a kid, I traded my NES for a Game Boy with a sketchy kid in school. He essentially scammed me into believing that I was gonna get tons of games, but when we got home to my house, he just pulled up two pirate cartridges from China, each loaded with a bunch of random games (and many duplicates), selectable in a list upon boot. (I did not grasp the concept of piracy whatsoever at that age.)

Anyway, the point I’m trying to make is that I never owned the actual Tetris cartridge, so I’m unsure if my copy is identical in function to the original game. I have tried for a longer time now to find this information online, without any luck.

What made me start thinking about this is the fact that while the game allows you to enter three hi-score names for each difficulty setting, they are all erased as soon as I shut down the Game Boy. I believe that whoever made the pirate carts sometime in the early 1990s must have picked titles which don’t require saving/loading (and thus a battery), but the fact that Tetris has such a “hi-score table” feature makes me wonder if the game is expecting a battery inside the cartridge after all.

It seems ridiculous to me to enter your name and then have it only last until the next time you turn the Game Boy off. I basically refuse to believe that this was the intention by Nintendo, but I’m not at all sure. They could have had the mentality that “games are supposed to have hi-score tables” or something. Or maybe they thought that all the kids playing for hi-score will want the winner to only have the “trophy” until the next recess? Nintendo saving a little money on each cartridge?

My honest best guess is that yes, the game did have a battery memory, and my pirate copy author simply didn’t care about this or maybe didn’t realize it? I doubt they modified any of the game ROMs. (Although that seems like it would freeze/hang when trying to save to the nonexistent battery memory…)

Would love to finally be able to put this to rest.

The answer is no. As you can see from this page (and in the picture below), which shows the internals of the game boy Tetris cartridge, there’s no battery inside, so the game doesn’t have any kind of battery backup. 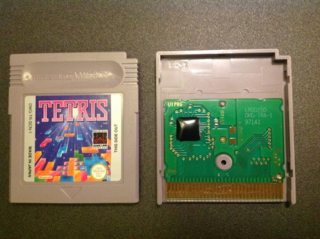