Just wondering what the drop rates were for Set / Legendary items, or is it totally random?
I imagine they would increase for later acts in Inferno. My monk is comfortable in Act 3 in Inferno, but I’ve only found one set item, so MF will increase chances for them?

In patch 1.05 the drop rates were doubled and Monster Power added a new bonus.

Using the base numbers from the Blizzard forums: 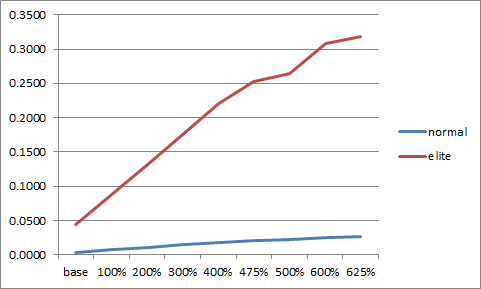 Empirically, running between 325 and 375 I’ve been seeing a legendary or set item about every 4 or 5 hours of game play, using Act 3, Monster Power 3. Most of them stink, but that’s another discussion all together. I’ve also had sessions where I’ve popped 3 in a matter of an hour at MF 260% MP 3 Inferno. I also see a legendary about every full act run at max MF in Normal (sometimes none but usually 1 maybe 2).

Keep in mind that each monster kill is an independent event. The odds are not cumulative, so killing 50,000 white mobs at 475% MF does not guarantee you a legendary pop (though I’d be somewhat startled if you didn’t get one). You still only have a small chance on each individual kill to see a legendary or set pop. People often misinterpret the probability of independent events to think that doing more of the same will increase their odds. The odds on each kills stays the same. What changes is the odds against seeing another consecutive failure. See this question and answer for a mathematical treatment.

So let’s look at the odds of seeing a legendary or set pop after repeated mob kills.

Tracking these curves it is very clear that even for large numbers of kills the probability of seeing a legendary pop can be very low for normal mobs regardless of MF, but that it is much better to hunt elites for even less than 1,000 elite kills at any MF. It is for this reason that most serious legendary farmers are getting their 5 NV stacks and killing as many elite packs as they can find, not lingering about with white hordes.

So does this match up with the assertion that you kill 10-30 times the whites is as good as killing elites? Looking at the 60% probability line, at 100% MF against elites, if you are killing 10 times then that’s better than the 100% MF against white mobs, it’s acutally on par with 300% MF against whites. If you are killing 30 times then the 100% MF normal line is actually above the elite line. My battle net account shows that overall, including levelling at all difficulties I am averaging about 20 whites : 1 elite, just as an arbitrary number for consideration. As a level 60 I target elites, so I suspect this ratio is decreasing but it will take some time for all the levelling to be averaged out.

The maximum pop chance from a white mob at maximum MF is still about half of the base chance for an elite. This fits with my empirical experience. I have popped legendaries off white mobs but far more off concentrated attacks on elite packs.

One thing that changes the scenario somewhat, that I’ve failed to make note of in this answer is that an elite kill gives multiple pops many (not all) of which have a chance of being legendary. Normal kills only give 1 or 2 chances. As both NV and MP add extra items into kills. If we assume that an elite gives twice as many items as a normal (an easy assumption) then with my white:elite ratio we should only use the 10x comparison, and then clearly the elite killing strategy is modestly better. If we make assumptions about 5 NV stacks or higher MP levels then this gap widens.

It is very clear there are diminishing returns for adding MF. The distance between the lines shows there is a large gain for going from 100 to 300 MF, a smaller but decent gain between 300 and 475 MF but a very minuscule gain for pushing to 625%.

If there are hidden mechanics working behind the scenes or if the base rate is incorrect, then this picture will evolve with time.