Recently, Pokémon GO had an update that allows you to gain extra experience from your first catch of the day. Actually, Niantic stated this on the Pokémon Facebook page:

You’ll earn bonuses for the first Pokémon catch and PokéStop visit each day. You’ll receive a larger bonus when you do this seven days in a row.

What are these bonuses?

Based on this website, the rewards are as follows:

It should be noted that the 7th consecutive day bonus is called a ‘Streak Bonus’ and is in addition to the First time a day bonus. See below for a screencapture of a streak bonus that includes the first catch bonus. 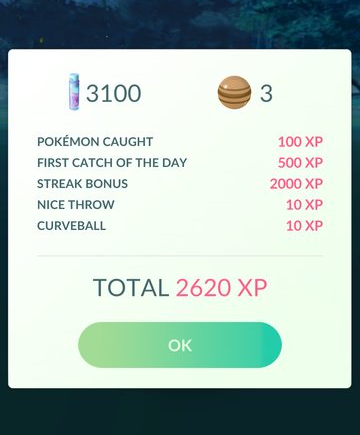 It should be noted also that the 7th consecutive spin gives more items and according to an official PokemonGo update on March 21st, a guaranteed Evolution item.