If the two worlds in which Booker/Comstock exists are completely separate, how did one get into the other? What exactly happens in the ending? Why is there a reference to Rapture from the first Bioshock game?

Booker DeWitt is actually Zachary Comstock, as they are both the same person. Booker Dewitt, after going through war (Battle of Wounded Knee), a gambling addiction, and alcoholism, loses his child Anna to repay some debts. After questioning himself, he decides to go for a baptism. However, at the last second in one universe, Booker rejects the baptism, and in another universe, he goes through with it and is “reborn” as Zachary Comstock. What I’m more curious about is how does Zachary Comstock enter Booker DeWitt’s world.

There had to be a reason why Zachary Comstock did not want Booker Dewitt to capture Elizabeth; he had to label Booker as a false prophet. Was this to keep their society alive (if Booker showed Elizabeth the “truth”, would everything they created cease to exist)?

What I’m more curious about is how does Zachary Comstock enter Booker DeWitt’s world. If the two worlds in which Booker/Comstock exists are completely separate, how did one get into the other?

“One man goes into the waters of baptism. A different man comes out, born again. But who is that man who lies submerged? Perhaps that swimmer is both sinner and saint, until he is revealed unto the eyes of man.“
– Zachary Hale Comstock, “Everyman, All at Once”

“A young Booker participates in the massacre at Wounded Knee and is tramautized by the experience. Booker considers baptism as a means of escaping his sin. In one universe … Booker refuses, believing that a baptism cannot erase sin. In another universe … Booker accepts the baptism and is ‘born again‘ as Comstock. The crucial split occurs here. Comstock and Booker both reflect on their actions at Wounded Knee (though nobody remembers Comstock being there since he assumed a new identity, Comstock reflects on his time at Wounded Knee in one of his Voxophone voice records).”***

The baptized Booker DeWitt (now known as Comstock) has funded Rosalind Lutece’s (whose research allowed for technology that makes Columbia fly) research of Lutece Fields (which led to the tears), which is how he gleaned through other worlds and where he got his “prophecies”. The tears made him sterile and grow prematurely old. This is why Comstock looks way older than unbaptized Booker, even though they should have been the same age, which is 38 during most of the events of the game).

From his “prophecies” he learned that “it is his ‘seed’ that will essentially bring about the next apocalypse by raining fire on the land below and having Columbia serve as the next ‘ark’“.***

This made Comstock hatch a plan to take his alternate universe counterpart’s (unbaptized Booker DeWitt) baby (Anna/Elizabeth) and groom her to be his successor, with the assistance of and using the technology (tears) made by Rosalind Lutece.

Booker DeWitt (unbaptized) feeling guilty about the events of the Wounded Knee massacre, dealt with his guilt by gambling. He then built up a huge debt to “people one would not want to owe money to“.

Booker DeWitt agreed to the terms and gave up Anna to Comstock. (Comstock traveled through a tear to get Anna.) However, Booker tried to stop Comstock from taking Anna in the last minute, but failed to do so. More info regarding this event here: How did Elizabeth lose her small finger?

Why is there a reference to Rapture, from Bioshock 1?

“Rapture story is a variable of this story in an alternative universe, but they’re not the same people and not in the same time (by the way, that would put Andrew Ryan in his 90’s during the events of the first game, which obviously isn’t true). Elizabeth said there’s always a man and always a city, but she didn’t say it was always the same man and city. There are an infinite number of possible variations of men and cities, each with their own infinite variations. That’s the multiverse theory: infinite worlds with infinite possibilities.”

“Andrew Ryan is related to Comstock in a universe that plays out with different ‘variables’:

Throughout BioShock, the bathyspheres are used by Jack as a mode of transportation to travel around Rapture and its ‘abandoned’ city sections. It is revealed that Jack can use the bathyspheres only because his genetic signature is close enough to Ryan’s that the security system doesn’t deny him access. Sullivan clearly states this in one of his Audio Diaries ‘Sisters, cousins — anyone in the ballpark genetically will be able to come and go as they see fit.’

— Booker is able to use the bathysphere to reach the surface. This occurs after the civil war when genetic restrictions on Bathysphere travel were put in place to stop rebels/dissidents from escaping.”***

“Elizabeth needed a place to destroy Songbird, and the best place would be deep underwater, where he wouldn’t be able to survive under immense pressure. This is seen in many of Fink’s blueprints concerning Songbird and Songbird’s reaction to water, seen the first time he attacks you when you and Elizabeth crash into Battleship Bay.

Another reason is to tie Columbia and Rapture thematically. Rapture, like Columbia, is very much a dystopia, and the game BioShock holds many similarities with BioShock Infinite. This suggests that Rapture is an alternate dimension of Columbia. This is further exemplified when Elizabeth mentions ‘There’s always a lighthouse, there’s always a city, there’s always a man”‘ pointing to the main thematic similarities between both cities, and the overarching themes of the series and possible future iterations of the series.”

There had to be a reason why Zachary Comstock did not want Booker Dewitt to capture Elizabeth; he had to label Booker as a false prophet. Was this to keep their society alive (if Booker showed Elizabeth the “truth”, would everything they created cease to exist)?

“It is one thing to imagine one’s future, and another to see it. I have seen the seeds of fire that will prepare the Sodom below for the coming of the Lord. But Elizabeth shall sow those seeds, not I. I will fall before the job is done…but she shall take up my mantle. The Lord is calling me home. I feel His love in every tumor, because they are the train which takes me to his station. And I go with joy, knowing that Elizabeth will take my earthly place. But the False Shepherd is coming to lead my Lamb astray. I will not board that train until she is safe from his deceptions.“
– Zachary Hale Comstock, “A Reward, Deferred”

“And the Lord saw the wickedness of man was great. And He repented He had made man on the Earth.” Rain! Forty days and forty nights of the stuff. And He left not a thing that walked alive. You see, my friends, even God is entitled to a do-over. And what is Columbia if not another Ark, for another time?“
– Zachary Hale Comstock, “Another Ark for Another Time”

Comstock has received “a prophecy that it is his ‘seed’ that will essentially bring about the next apocalypse by raining fire on the land below and having Columbia serve as the next ‘ark’“.***

Booker DeWitt has seen this event in a dream (New York in flames) and has actually seen it when an older Elizabeth (from an alternate universe where Booker failed to rescue her) showed it to him. The older Elizabeth in that alternate universe was broken by prolonged capture and hopelessness because Booker failed to rescue her, that she gave in to that universe’s Comstock’s indoctrination. Comstock doesn’t want Booker to stop this “prophecy” of his from happening.

What exactly happens in the ending?

This BioShock Infinite Timeline posted in the Reddit /r/BioShock subreddit by Reddit user, haettenschweiler, gives a great explanation of that:
(click on image preview below to view complete, original-size image) 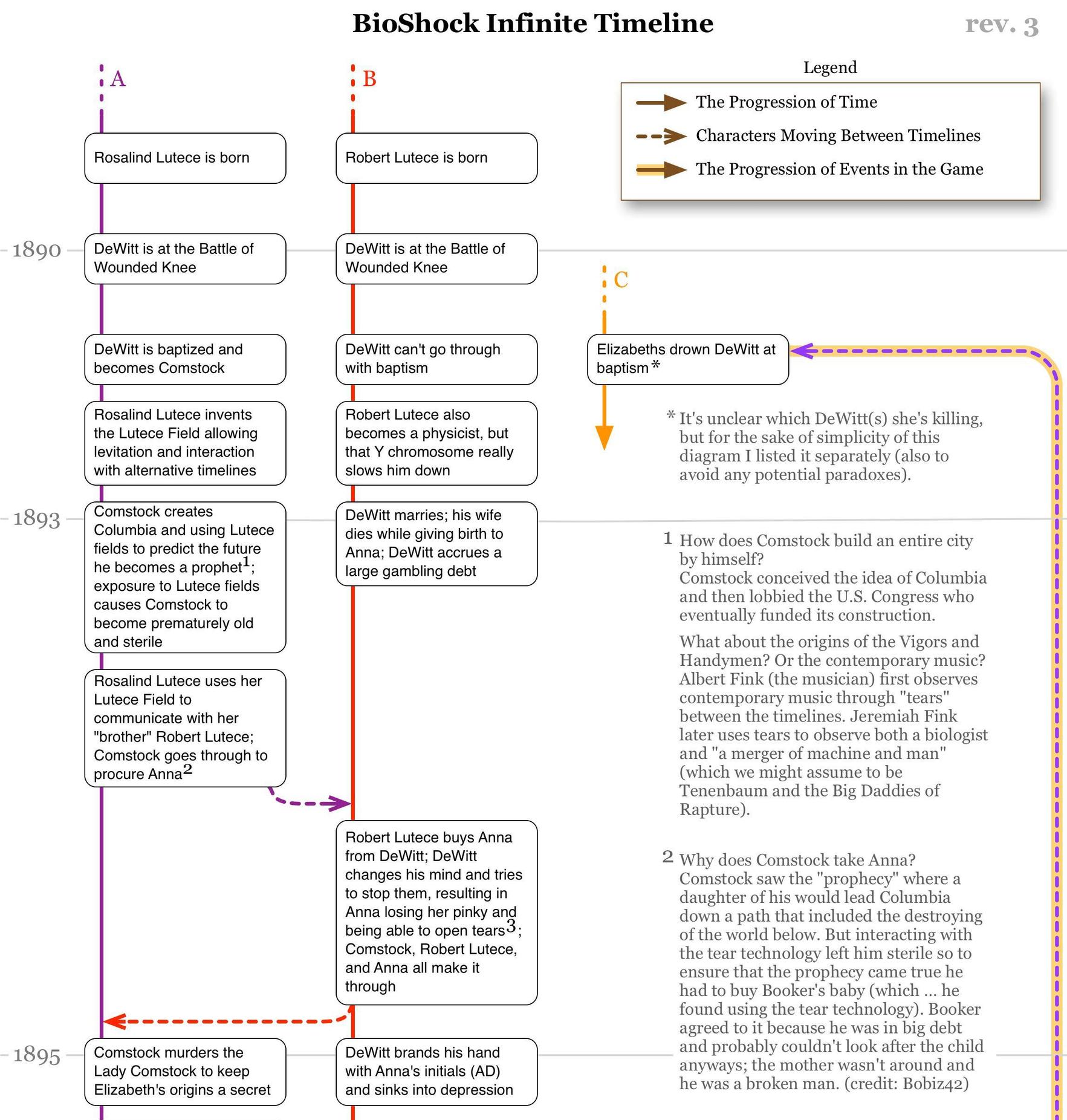 Other questions with answers where the ending is expounded upon are: