I’ve seen that I can tweak my game by editing files like bioinput.ini and bioengine.ini, but I couldn’t find these files anywhere. They seem to be part of another file called coalesced.bin, and I don’t know how to edit it. I want to do this so that I can tweak some graphics settings and set up some cheats, like unlimited ammo, free skill points, free credits, etc.

How can I do this?

A lot of game tweaks are possible for the PC version of Mass Effect 3, both in terms of graphics and “cheats”, and can be done by editing Coalesced.bin. Most of the results you find when you Google for how to do a tweak or cheat will tell you which ini file and variable to change, but not exactly HOW to do that.

Warning before you start: I do not recommend using any “cheats” or a modified Coalesced.bin file if you are going to play multiplayer. You may end up banned. See here.

The coalesced.bin file is basically a collection of variables that the game uses to determine different things, from graphical effects to key bindings to things like shield recharge rates. You can affect the game in fairly signficant ways by modifying this file. To do so, you’ll want to grab the ME3 Coalesced Utility.

ME3 Coalesced Utility? What?

It’s a tool that unpacks the .bin file so that you can edit it, and then repacks it when you save. There are many ways you can do this, but this is the easiest to use tool that I’ve found. You can grab it here.

Okay, I’ve got those. Now what?

You should get a screen that looks like this: 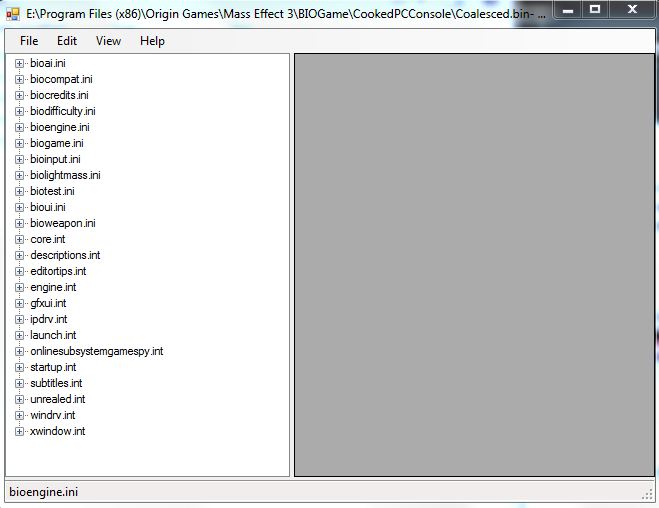 Okay, I’m ready! What settings can I tweak?

Way more than I’m going to go into. If you want to know if something specific is possible, either Google for it or post a question and ask.

One common usage will probably be to bind keys to commands so that you can manually trigger them in-game. For example, this is how the current answer about how to tweak your Field of View does it. You smack a numpad key and it changes your FOV. In general, you can do a lot of things this way by doing the following: 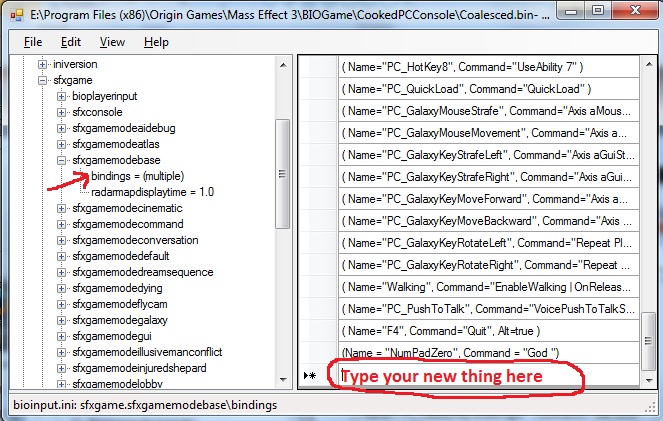 Here are a few example commands:

This page lists even more commands.

Again, this is about how to edit the file, not necessarily what to edit. If there’s something you want, like how to unlock all weapons (which you can do), Google it and and you’ll probably quickly find the command you need. Or ask a specific question about what you want to do (via the “Ask a Question” button up top, not by leaving a comment on this answer). I’m not trying to turn this answer into a repository for every possible cheat and tweak. The purpose was to explain to you how you get to the point where you enter these commands in the first place.

Can I use this with multiplayer?

I do not recommend you use this with multiplayer! Yes, I said this already. It was worth saying twice. I have seen rumors that EA might block/ban players who are using a tweaked file, since they could use it to cheat. I’m trying to get a definite answer on if non-cheating tweaks will be a problem, but for now, better safe than sorry.