When I’m playing as the gunner of my team in Harm’s Way, a free XBLA title, I routinely get a notification on my screen that says:

What kind of trouble is my driver in? Is he under fire? Or has he merely been bumped? Gone off the track? Maybe just fallen back a position in the race? Knowing what triggers these notifications would make it much easier to ‘help’ my driver.

You get the notification when your driver is under fire from another turret.

Be sure to position yourself so that you can shoot players in other turrets and stop them from hurting your driver. You will be able to see other players controlling turrets marked with their screen name: 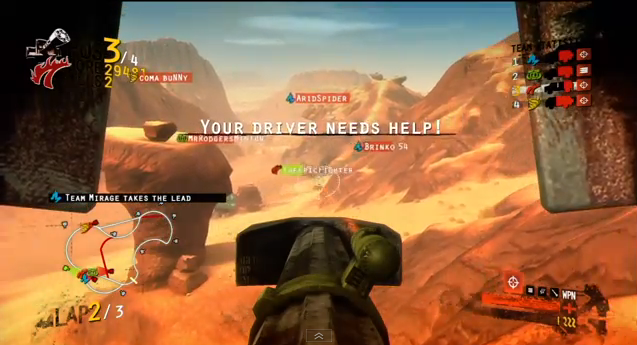 In the picture above you can see that AridSpider and coma buNNy are in turrets that are attacking drivers (friendly marked in green). Firing at these turrets will prevent other players from using them, saving your poor driver.

This video has many examples of the notification popping up, all when the driver is damaged by another player’s turret.