How can I reach that secret area in Diablo III?

According to sources on the Blizzard forum, the secret level is called Whimsyshire: 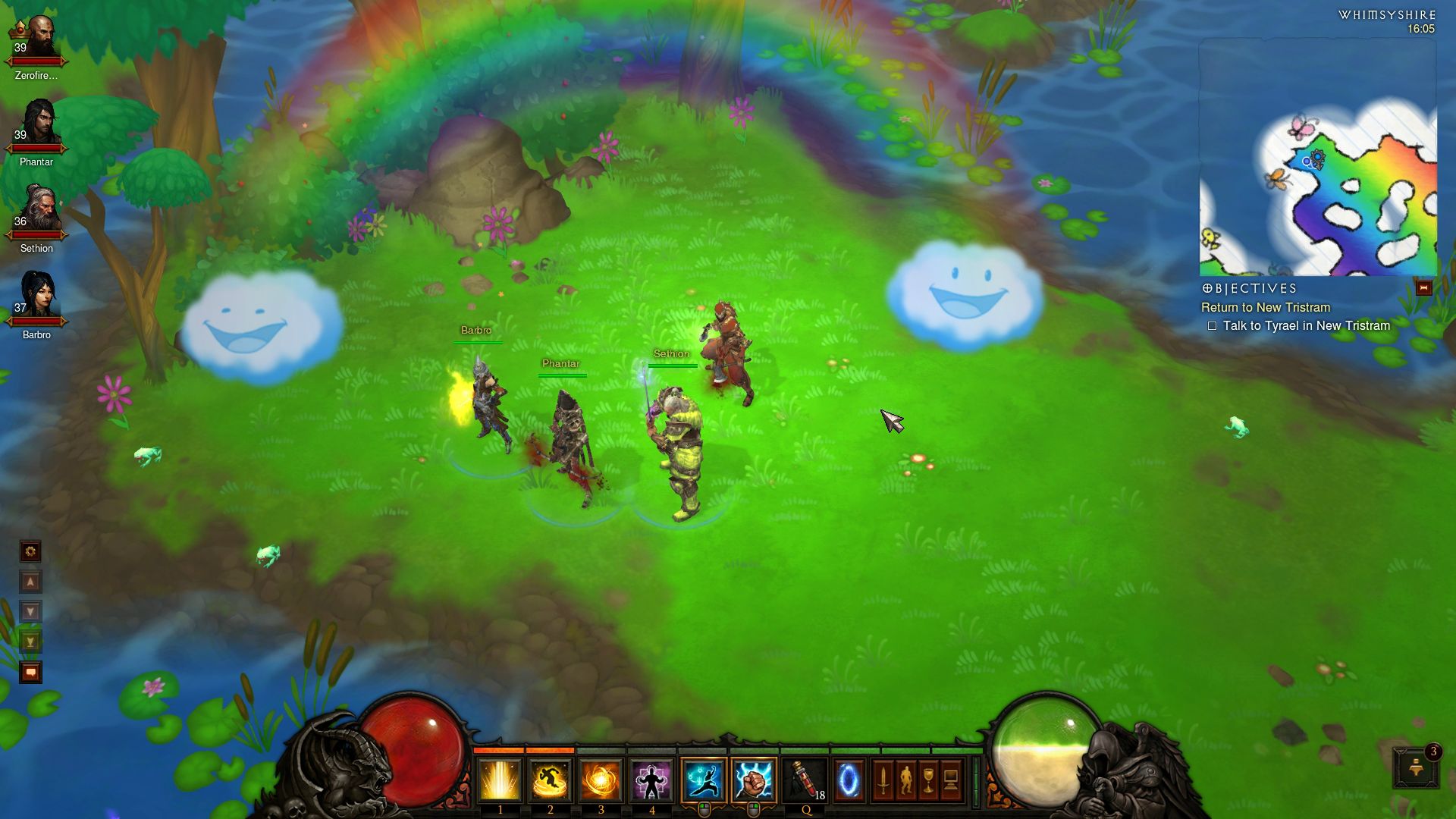 Whimsyshire is essentially a single-level dungeon, much like the dungeons you find randomly while exploring the wilderness. Just like these random dungeons, it has chests and other lootable objects, plus a plethora of monsters, including some champion and unique monsters.

In order to visit Whimsyshire, you must craft a Staff of Herding, and take it to a specific area in Act 1.

The Staff of Herding

Unlocking Whimsyshire requires a Staff of Herding, which can be crafted at the blacksmith for 50,000 gold and requires the following items:

The mushroom in a patch of mushrooms that occasionally spawn on level 1 of the Cathedral (screenshot). When you enter the room, your hero will remark about the unusual mushrooms. The room it spawns in always looks the same so you can look for it in the minimap. (minimap screenshot).

If you’re past this point in the story, go to Act 1, Mission 4: Reign of the Black King. Travel from the New Tristram waypoint to the Cathedral Garden, and then walk out the gate and back around to the front of the Cathedral. Open the door and descend to Cathedral Level 1.

If you’re past this point in the story, return to Act 1, Mission 9: The Imprisoned Angel. Take the waypoint to Leoric’s Manor. Backtrack through the manor into the room with the large statue overlooking a double staircase, and then head into the room to the northeast on your minimap.

Squirt the Peddler sells this item at the Hidden Camp in Act 2. This vendor was moved in patch 1.0.4 to stand just up and to the right of the waypoint in the Hidden Camp. The item is on the “Miscellaneous” tab. The cost for the bell is 100,000 gold.

From the Act 2 waypoint “Path to the Oasis,” travel southeast. Zaven the Alchemist may be here, and if so you can save him to access the cave. (screenshot) The item is in a the “Mysterious Chest” which also may not spawn, even if you’re in the right dungeon.

If you’re past this point, load Act 2, Mission 7: Blood and Sand. Take the “Path to Oasis” waypoint, as noted above.

Gibbering Gemstone – Caverns of Frost in Fields of Slaughter

This item drops from a “purple” class monster named Chiltara that has a chance of spawning in the second level of Caverns of Frost, a random dungeon that may or may not appear in the Fields of Slaughter. Other dungeons may appear here, but you can only find this item in the Caverns of Frost.

From the waypoint “The Bridge of Korsikk” travel almost due east. You should see a small cluster of debris that has a small, U-shaped indentation in it. (screenshot) The dungeon may spawn northwest, or southeast of this debris. (There are other potential locations, but these are the fastest 2 to check) Ensure this is the Caverns of Frost before clearing it!

If you’ve passed this point, load Act 3, Mission 6: Siegebreaker. Take the waypoint to “The Bridge of Korsikk” as noted above.

Plans for the Staff of Herding – Great Span

This item is a random drop from Izual, who is a midboss on the Great Spire. Unfortunately, there’s not a “fast” quest checkpoint for this one – you’re going to have to start Act 4, Mission 4: Prime Evil, and then fight through the Silver Spire Level 1 in order to get to the Great Span.

Izual tends to favor attacks that freeze you in place, so bring any skills you know which can break his freezing spell. Many of the “movement” skills (ie, Spirit Walk) can do this. If you kill Izual and he does not drop the plans, you’ll have to exit out, reset the quest to “Quest Start” and start over again, fighting through Silver Spire Level 1.

For this reason, I’d suggest being overleveled before you attempt this – fighting this area repeatedly is likely to be time consuming and frustrating if you can’t just obliterate everything quickly.

The Staff of Herding you create from this recipe only unlocks the Normal difficulty variant of Whimsyshire. To unlock Whimsyshire on higher difficulties, you’ll need to upgrade the staff. You can find more information about how to find the plans for these upgrades in this question:

How do I get higher difficulty Plan: Staff of Herding?

Once you have the staff, travel to New Tristram by choosing any of the quests in Act 1 past the point where the road to Old Tristram is open. From the New Tristram waypoint, follow the road towards Old Tristram. When the path turns to the right past the abandoned houses, you will find a fissure in the ground along the southern edge of the path. Nearby will be the Ghost of the Cow King. (screenshot) With the Staff of Herding in your inventory, clicking on the Ghost will trigger a few lines of dialog, and then the fissure will open.