For example, let’s say I have

What happens if I’m being shot by a missile which is supposed to inflict 100 points of fire damage?

In general, ItsColby nailed the basics of how it works. Damage reduction is multiplied rather than added. So 70% Armor and 30% Physical Resist doesn’t mean you’re a god who blocks all damage… you’re actually blocking 79% of the damage. But read on for a closer look.

Armor is good against all damage types

I just want to mention that before I even get started, because a lot of people don’t seem to realize it. Armor DR blocks all damage. Fire Damage, Physical Damage, Arcane Damage, etc. It’s good against all of them. For any given attack, you’ll always be getting your Armor DR as well as one of your resistance DRs. You’ll possibly get other special bonuses, such as the special DR against missile attacks in your example of 2% Missile Reduction, but you’ll always have at least Armor and Resistance.

Resistance is good against a single damage type

While it’s possible multiple resistances might come into play for an attack (such a Diablo’s Lightning-Fire breath), the conventional wisdom is that such attacks have their damage broken into components (though I haven’t seen any Blizzard confirmation of that), and DRs are factored in separately for those. You can pretty much just think of it as two separate attacks hitting you at once.

Dodge doesn’t really interact with damage reduction directly. Dodge is whether or not you flat out avoid all damage from an attack. If you dodge successfully, damage reduction doesn’t occur because you avoided the attack and took no damage. If you fail to dodge, you get hit with the full attack and damage reduction is applied normally. There’s no “partial” dodging.

How do I figure out how much damage I’m resisting?

The general equation to figure out your damage reduction is: 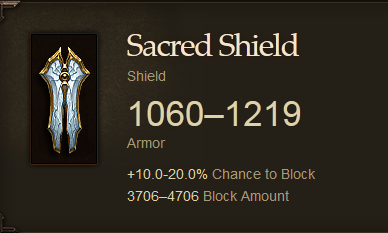 As you can see, shields have an Armor Value, a Chance to Block, and a Block Amount.

So the formula for damage received when a block is successful becomes:

What about damage absorption from skills like Diamond Skin?

You can think of this pretty much like you might think of a shield that has a 100% block rate. The damage absorption from skills such as Diamond Skin have their absorption applied after standard damage reduction from things such as armor, resistances and block amount.

How do classes differ?

The two original melee classes, the Barbarian and Monk, seem to have a hidden DR bonus of 30%. This multiplies into the damage reduction just like any other special DR modifier, such as 2% Missile Damage Reduction would. The new class, Crusader, has a 15% damage reduction bonus.

So in your example above, Thog the Dual-Wielding Barbarian has been neglecting his resistances but is wearing some very shiny armor. He’s got 10% Fire Resistance and 70% DR from Armor. He’s also got some boots of 2% Missile Damage Reduction. He gets shot with a fire arrow that does 100 damage. And don’t forget he’s got that 30% for being a Barbarian!

Zoltan the Wizard doesn’t have much in the way of armor, and is only at 40%, but his intelligence gives him decent fire resistance of 60%. Sadly, he doesn’t have those nice boots that Thog has, but he is using a shield which has a 20% block chance and blocks an average of, say, 25 damage. As a wizard, he doesn’t have Thog’s innate damage reduction of 30%.

Zoltan actually does okay! Thog had great armor, but his low resistance really brought him down. Without that innate 30% for being a Barbarian, he actually would have fared worse than Zoltan, taking 26.46 damage on a hit. And if you factor in the fact that 20% of the time Zoltan will block the entire attack, in the long run it’s as if he’s taking about 19.2 damage per hit. Not bad for a dude in dress!

So do I want more Armor, or more Resistance?

Credit where it’s due: