The only things I’ve found so far are a cart method (which ceased working in 1.6), a dispenser method (utilizing the decay on dropped items, but this requires occasional feeding), and a binary counter (which won’t work for a single input but rather a fluctuating one).

I want to have a circuit that when I apply an input signal, the output signal doesn’t change for 2 to 5 minutes. When the input turns off, I again want a 2 to 5 minute delay.

I could accomplish this with (roughly) 240 to 600 redstone repeaters, but this is far in excess of being useful.

The only method I can think of, but would require a XOR gate (on the button-input and final output) to start and stop a clock attached to a binary counter. While I can make room for a device of this size, I was hoping for something simpler.

Minecraftaddict’s “Extreme Delay Redstone Timer” is the longest delay circuit I know of. (But I can see from the comments that you’ve already found it). However, directly using this circuit won’t work with a light sensor output, since the output of a light sensor would be 10 minutes on and 10 minutes off.

The solution to this is to connect the output of your light sensor to a falling-edge and rising-edge monostable circuit that are OR’d together. 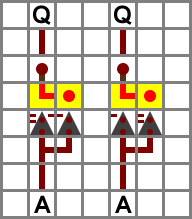 This is an image of a rising-edge trigger on the left, and a falling-edge trigger on the right. You would connect the A inputs together – to the output of your light trigger. When the A input is turned on, the Q output of the left circuit pulses. When the A output turns off, the Q output of the right circuit pulses. Because of this, you can connect the two Q output wires together (ORing them) to have an output that sends a signal whenever the light-sensor changes.

However, these circuits are designed to make a very short pulse. Because Minecraftaddict’s delay circuit comes with a built-in pulse shortener, you will want to send a slightly longer signal to it. To do this, just add more repeaters to the edge triggers (add an extra repeater to when the current repeaters are). Leave the repeaters that should be on the first setting like that, but change the repeaters that should be on the second setting (according to the image) to the fourth setting.