KSP 0.22 has introduced a new “career mode”, which introduced a tech tree, which you can progress along by collecting “science”. I’ve figured out some things that can give you science, but I know I’m missing a lot of them. How can I collect science?

Science points are earn by doing experiments in diverse situation.

A basic launch and land rocket will earn you some points. Better flights (orbital, Mun fly-by, etc) will get you additional rewards.

As far as science is concerned, the basic rocketry science node give you access to the Mystery Goo Containment Unit. This is your main scientific related module for the moment. Later on, you will unlock in the bottom tree the Sc9001 Science Jr. module. Other parts with science experiments are all the old scienctific sensors and the Sensor Array Computing Nose Cone which replaces the avionics nose-cone from earlier versions.

Since you will only get points when you recover your ship, I advise you to get multiple science equipment for a single flight. Then you want to use the modules in diverse situation:

Keep in mind that EVAs and crew reports follow the same principle. EVA on Kerbin will count.

You can also communicate information through radio, but it will give smaller rewards (10-40%), but using a probe, it can be repeated multiple times unlike crewed vessel that need to return home.

Edit: and there I went to Minmus : 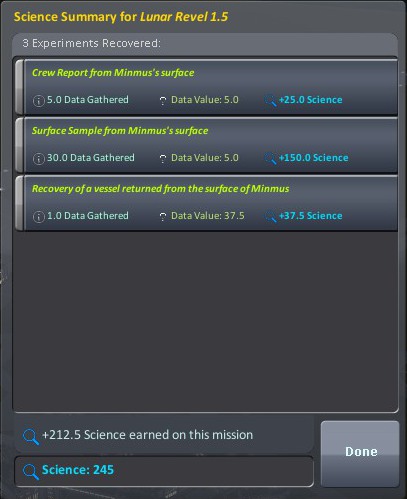 I think I’m missed the EVA report though.