On the new Vikendi map, you see that feet, cars and snowmobiles leave tracks in the snow (not sure if bullets also leave tracks in snow).
I read that these tracks disappear after some time, but is it known exactly how this works?

Do they disappear after a fixed time (if yes, after how long?) or does this depend on other factors (weather, player population in area, blue zone, car or feet)?

Do the tracks slowly fade or do they disappear at once?

Whacky Jacky does a lot of testing when it comes to these kinds of observations, and he found that footprints stay for at least 15 minutes. He even goes as far as saying that there is no reason to believe they disappear, unless you move far away from them, but at that point you can’t really prove if they are still there or not since you won’t be able to see them. He does not include a time lapse of his testings, he only states his thoughts.

From PUBG’s own site, they have a pretty cool tour tool you can use to learn about the new map. In the tour, they include this snippet for footprints: 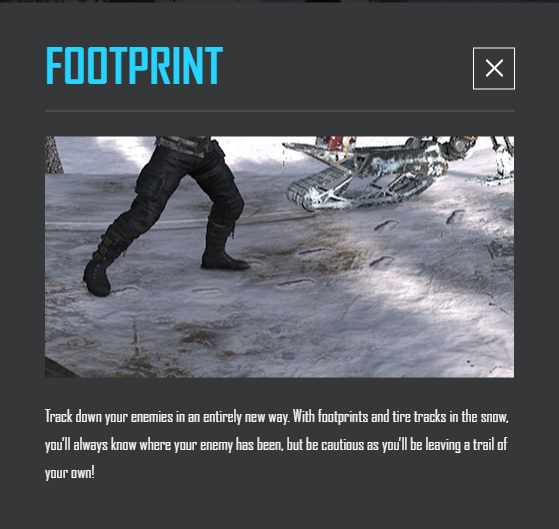 It seems their intentions is for players to use footprints and tracks to track opponents (obviously). Since they make these intentions pretty clear, its unlikely they despawn overtime. Why would they put a feature in that they want players to use if they just disappear after time anyway?

Interestingly, the patch notes for this update state:

Keep in mind that footprints and tracks in the snow don’t stay around forever!

This indicates that footprints do eventually disappear. I found another video of a time lapse that a player did testing it, and right around the 10 minute mark of them waiting, the footprints begin disappearing in the order they were created. This would lead me to conclude that they remain on the map for 10 minutes after they are created. I haven’t found any evidence of weather playing into this just yet, but will keep my out for some.