Playing civilization 5 the game explicitly says roads cost gold to maintain. This is of course a major variable in the answer to “should I connect these cities by road or not” question.

However, looking at the income report I do not see a “road maintenance” entry, and comparing with the number of roads I have it really feels that they do not cost 1 gold per tile, which is what I assumed from the game description. Further, I’m pretty sure building a single road tile does not affect my income.

So, do roads really cost gold to maintain, and if they do – how does it work? Is it really 1 gold per road tile, regardless of where that tile is?

To directly answer the question, road maintenance is listed as “Tile Improvement Maintenance”, when you mouse over your treasury/income in the top left. You can see a circled example in the screenshot below. As for the details:

Roads cost to maintain both inside and outside your borders

Because my conclusions are contrary to previous info we had about road maintenance in neutral territory… Pics Or It Didn’t Happen!

Exibit 1: Prince Difficulty, some roads in, some out. 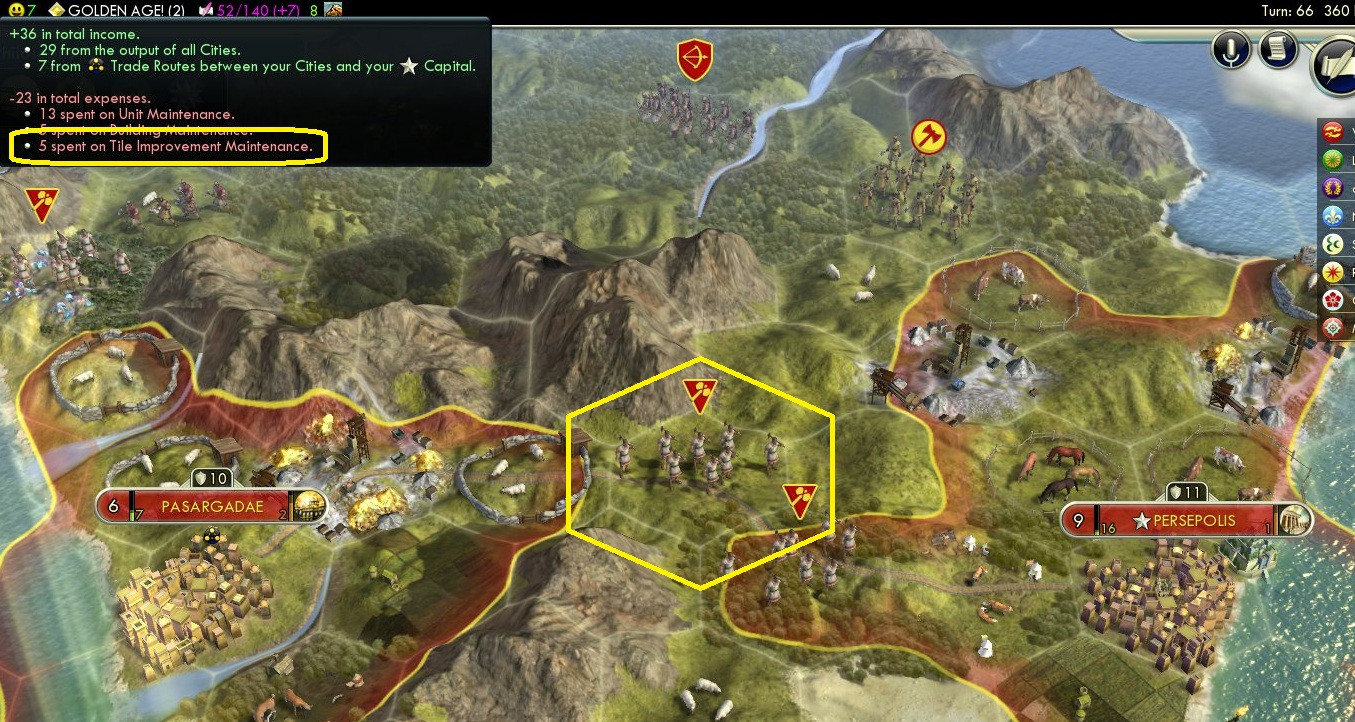 As you can see, I have 4 roads in my territory, and one outside, costing me a total of 5 maintenance. I have no other roads anywhere else. I wish I had taken a screenshot of the previous turn. The next time I find myself in this situation, I’ll take a pair of screenshots and replace this single picture. Either way, remember you can always try it yourself to be sure. YaY Science!

Exibit 2: Settler Difficulty, all roads out. 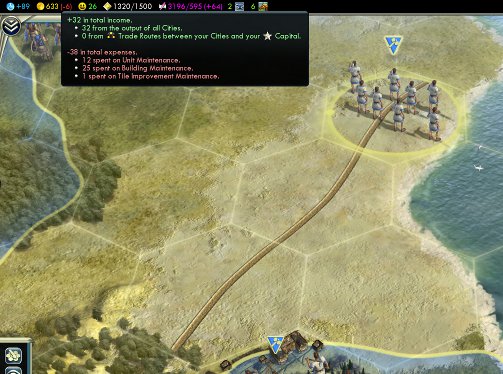 Thanks to @DMA57361’s questions, I checked a different difficulty and a different number of roads outside the borders, namely all of them. On Settler difficulty, building roads only outside of my borders, I still ended up with maintenance for the roads, so clearly they do cost.

Roads cost the same to maintain in your own territory, and in neutral territory. How much varies by difficulty:

Road maintenance is only ever a whole number. In case of decimal remainder, always round down. For example, on Settler, 2 roads cost 0.68, which clearly got rounded down to 0.

To find each of these, I built roads either only inside, or only outside my borders at a time. This confirmed the same results for inside and out, but got me only close numbers. Then @Oak used his powers of XML scrying, and found the exact numbers for us.

Since so many difficulties are 1g, (and the ones that are not are the easier difficulties anyway,) and for our general happiness, I hereby declare “1g” an acceptable approximation for all further calculations relating to road maintenance. Hurray!

When next I can test, I’ll re-test road’s in another nation’s borders, to clean up the next section! Same Bat-time. Same Bat-channel.

Roads DO NOT cost to maintain inside another nation’s borders

Edit: This section is suspect until I complete further testing, since one road did not cause me maintenance. My mistake for not setting up a proper control. This still may be completely true, but I need to test on different difficulties and compare with similar numbers of roads in my borders and in neutral territory. 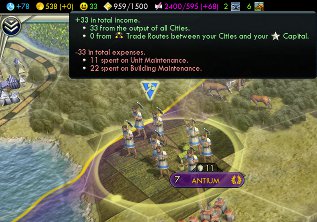 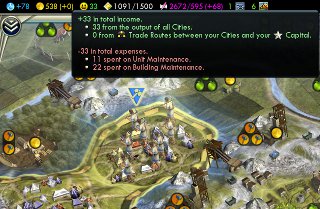 In the game these two pictures originated from, I had no roads, and built a road inside each another civilization’s borders, and a city-state’s borders. I can’t verify that they were costing any gold to the land’s owner (Rome’s income was fluctuating quite a bit), but I can say for sure they were costing me nothing. This is likely what bwarner saw that caused the error.

There may be other effects that change which roads cost to maintain, but these seem to be the major ones. Anyone found anything not explained by these.

PS As with any screenshot heavy post, I do my best to crop/scale the images to reasonable sizes without losing the important parts, such as the circled text. They still end up crowding the page, for which I’m sorry.