I don’t understand the final “baptism” scene. How can it have any effect on how the story ends?

No, the answer isn’t, “Well, Elizabeth brought Booker back in time to where he was supposed to be baptised.” While she may be able to do that, her and PlayerBooker would see PlayerBooker from the past, or PastPlayerBooker. If they wanted to kill PastPlayerBooker, that would make sense to kill him to prevent Comstock from ever existing, but that didn’t happen. We saw PlayerBooker being drowned by Elizabeths.

Someone please explain to me how drowning PlayerBooker, again since he already made the decision to deny the baptism, fixed anything.

This question will result in inherently speculative answers. Unless we get word from the people who wrote the story, any of us could be correct.

Multiverse theory posits that every decision you make results in a new universe. There’s the universe you’re in, where you made the choice you made. There’s also an alternate universe, where you chose another option. You can visualize this as a series of paths which continue to fork at each decision point. 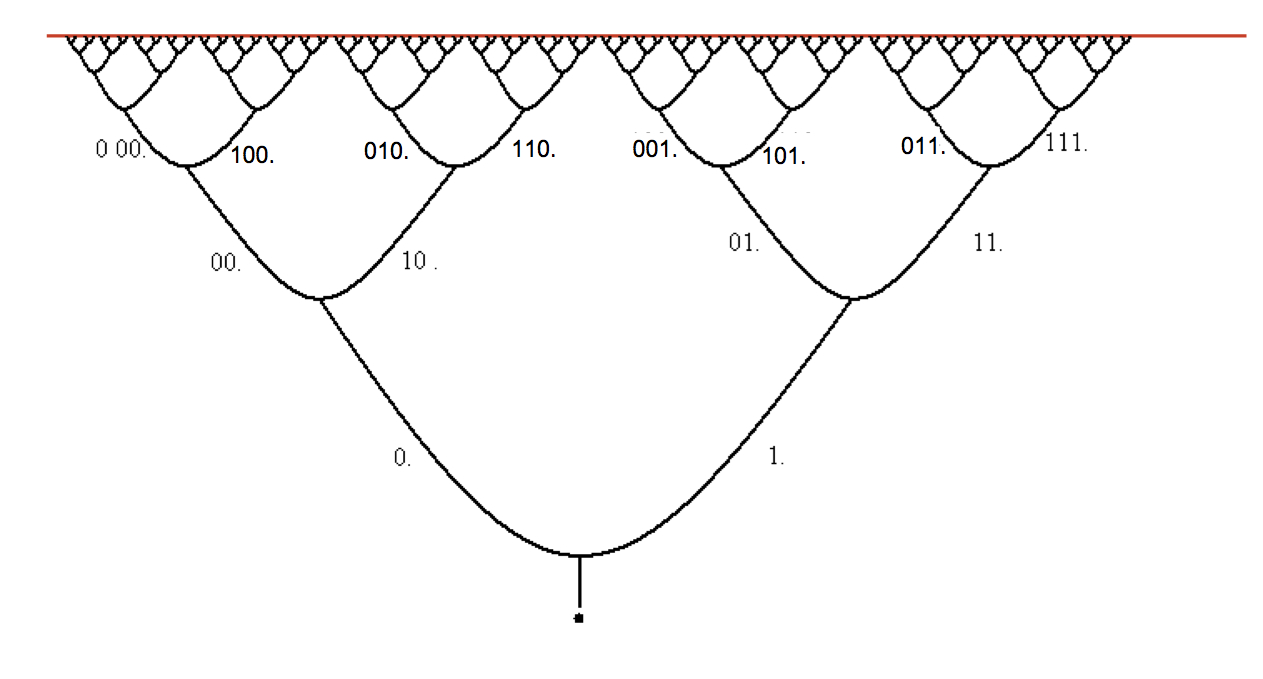 Traveling between universes at the same point in time would be like traveling horizontally across the image above: you see what would have happened if a bunch of different choices were made, but you don’t affect any of the other branches.

Elizabeth created rips in space. The blue rips she created were links between alternate universes at the same point in time (or horizontally in the above image). The red rips appeared to cross time as well (like the Paris tear in her room), but they never enter the red tears.

During the ending, Booker and Elizabeth enter the “lighthouse ocean”. This takes them to a space outside of any of these branches. They start going through a series of doors. These doors allow them to go backwards and forwards in time. In other words, they can travel vertically in the image as well as horizontally.

Let’s treat the bottom node of the above image as the choice of whether to get baptized or not. Before you make that choice, you’re “PreBaptismBooker”

When you back out of the baptism, you follow path ‘0’ and becomes NoBaptismBooker0. Every universe where you never got baptized would be the ones ending in ‘0’ in the image (the entire left side). This represents the Booker Universes. The first time you go back to the baptism, this is the path you see play out.

This choice spawned another universe where he didn’t back out of it. This is path ‘1’, where he becomes BaptismBooker1. Every universe where he gets baptized would be the ones ending in ‘1’ in the image (the entire right side). This represents the Comstock Universes.

Choices continue to be made in both universes, thus causing more branches. Each branch, however, shares a single parent point in time: the time when Booker decides whether or not to go through the baptism.

Later, when Booker decides to go back and kill Comstock before he’s ‘born’, they travel through another door and go back to the baptism again (the bottom point).

This time, you begin to see him going down path ‘1’ into the Comstock Universes: he accepts the baptism. However, before any further decisions can be made, the Elizabeths drown him. This action snuffs out the entire set of Comstock Universes (the right side of the image) because it changes the result of the decision: Instead of the baptism decision turning him into Comstock (or BaptismBooker), it turns him into a corpse.

Your assertion that this can’t be the case seems hinged on the fact that, by traveling through time (rather than across universes at the same time), you’d be a different physical entity than the PreBaptismBooker.

This would be the case if traveling backward along the forks worked like traveling across them. You’re right in that there are tons of Bookers running around at that point in time that are temporal decedents of PreBaptismBooker.

He then decides to undergo the baptism (becoming BaptismBooker1), then drowns immediately before he can become any other BaptismBooker1 on the right side of the image.

This is how, after the credits, you see Booker again, and he heads to the crib to see Anna. What you’re seeing is one of the Bookers who spawned from NoBaptismBooker0 (the one who decided not to get baptized) and later decided to do something which resulted in Anna being born.