I know that there is a 15 block limit before a repeater is needed, however I am looking for the TOTAL distance that current can travel. Is it infinite? Can I keep adding repeaters and go on forever?

I don’t mind whether “old-school” repeaters are used (2 NOT gates) or the ones added in Beta 1.5, biggest distance wins.

Interesting stuff guys, I would love to see some pictures of your findings!

Using repeaters the travel distance is infinite. This can be exploited to build moderately large memory buffers utilizing delay-line memory, for fun and profit.

Note that there might be practical limits to how much the game engine can handle before it blows up.

If it is not a question of distance, but rather an issue of the theoretical maximum number of wire/repeater blocks that can be powered by a single redstone torch, this number is fairly large.

When you consider the fact that redstone repeaters will reset current to 15, the actual distance itself is infinite, but there is a practical distance; loaded chunks. This limits you to an area of 16 * 16 * 81; and if you want to keep your circuits isolated; this works out to an approximate upper limit of 11000 powered pieces of wire/repeater, unless you use nothing but repeaters and wires for turns, in which case you can almost completely tesselate all of the loaded area, allowing for a lossage of approximately 144 blocks to turning space.

Edit: It’s worth noting that in an all-repeater configuration; while you get upwards of 20000 square meters of active redstone; said redstone won’t be able to power anything much; and any escape gap you make to allow devices to draw power will carry a pretty big penalty to the number of blocks that can be powered (upwards of an entire row).

Reedit: Did a bit of a gaffe in my math:

In an all-repeater configuration, you can also use several levels; up to about 62 (allowing for bedrock and sky) layers of tightly packed redstone; giving you somewhere north of 1,200,000 meters of redstone current; or a little south of 1.2 megabits of storage in delay-line memory; 150 kilobytes.

In a single player game this 150kB is as such the absolute maximum storage any Minecraft-based computer can have. 150kB might not sound like a lot; but if you use some sort of clock and a suitably designed buffer, it amounts to almost 10 minutes of 256-tone music, or over an hour if you limit yourself to 32 tones. (Of course, you would have no space to build the music player and still have the memory work, but that’s not the point. 😉

A screenshot of a possible design of a Minecraft High-Density Memory Cell: 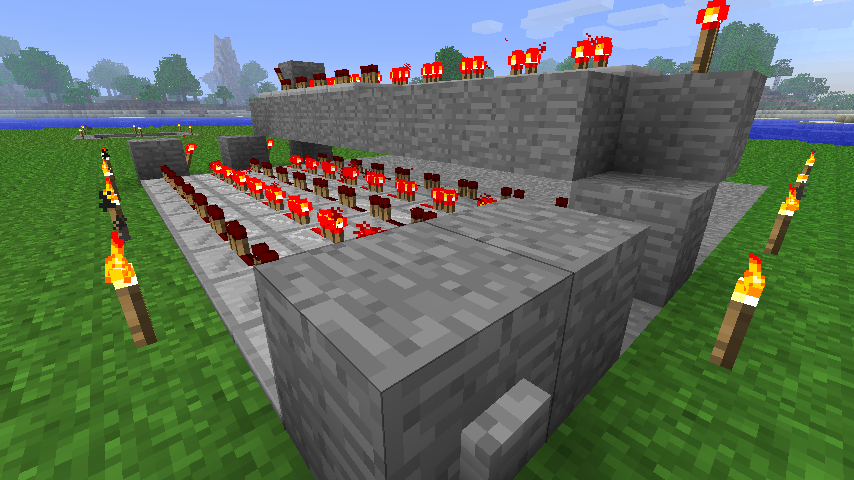 Not pictured: A monostable circuit allowing 1-tick input and a loopback device turning it into permanent memory

Note: Working out how large a stretch of redstone will have to be sacrificed in the central chunk of this memory cell in order to build a 32-tone music player; a 32-bit buffer and utilities to program the music is left as an exercise to the reader.

As is actually building it and seeing if it will actually work on the scale described. 😉