In Civilization V, you attain a cultural victory by accumulating enough culture to purchase at least 36 social policies, and then building a wonder. The catch is that the more cities you build, the more culture you need to generate before you hit the next “plateau” of culture.

What is the ideal number of cities for a cultural victory? Does it change over time?

The question you’re really asking is “When does the combined culture / turn of an additional city outstrip the increase in social policy cost incurred by founding that city?”

The short answer is…

We know that adding another city increases the culture costs by approximately 30% of the base cost (that of 1 city). Therefore:

If your maximum potential culture / turn won’t increase by at least 30% due to the new city, you are hurting, not helping, the time till your next social policy.

(This may be slightly hard to calculate, and if you take too long to reach your “maximum potential culture / turn” you’re actually wasting turns.)

The long answer is…

To begin with, we need to make some assumptions: 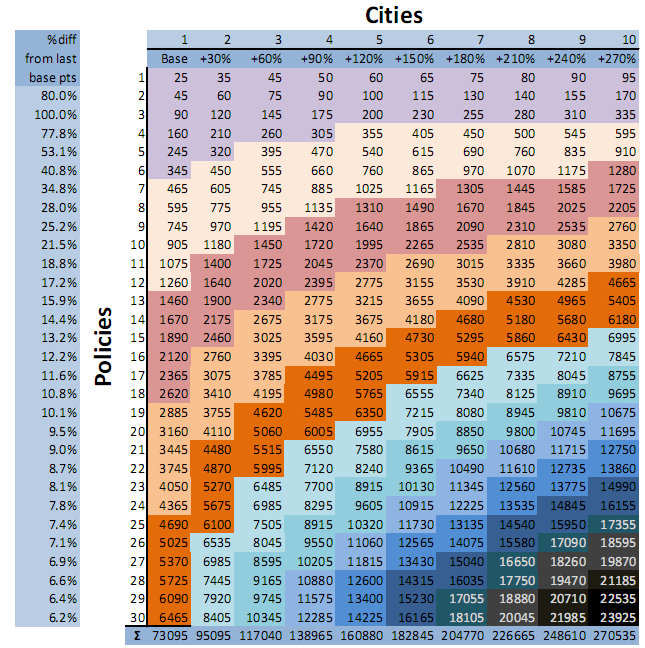 And now, some math.

The 1st social policy costs 25 points with a single city. In the ancient era, your cities can generate 2 culture / turn due to the monument. (Remember, we’re ignoring the palace for now)

For the second social policy, the ramifications of the # of cities gets magnified due to a larger starting value: One city takes 23 turns, two cities take 15 turns, three cities take 13 turns, four cities take 12, five cities take 10, and again, we run into diminishing returns cap out at at six cities (10 turns).

It is not until the 4th social policy that this trend is broken and diminishing returns end at the NINTH! city.

Remember — this assumes that each city has a monument the minute it is founded.

Now let’s say we’ve reached the classical age, and have temples in addition to monuments. Each city is now generating 5 culture.

The first policy takes 5 turns with a single city, 4 turns with two, and 3 with three.

What (hopefully) becomes clear is that we reached diminishing returns (4 cities as opposed to 6 cities) much faster when each individual city’s contribution is higher. The more culture any one city is capable of producing, the more incentive there is to produce more cities. Even if you don’t manage to build every +culture improvement immediately, you’re still likely to come out ahead (as long as you’re pre-diminishing returns).

So while the optimal number of cities changes due to any number of factors, you can probably safely not shoot yourself in the foot if you stay between three and six cities, with six being on the high end.