My understanding is that you get a base number of Influence Points (IP) for losing each game and a little more for winning a game. In addition, the amount of time a games goes on seems to factor into the calculation as well. For the following modes, what is the base IP gain for wins and losses of the various game lengths? If there’s a predictable calculation for IP per minute for wins/losses, that would be an acceptable answer.

I’m not interested in calculations including IP bonuses for your first game, bonuses for streaks of games where you didn’t leave, or any other bonuses.

Bonus points if you take the initiative to calculate the optimal game length for IP gain. By that, I mean “at what point does ending the current game one way or the other and being able to start a new game result in more IP gain over the course of a play session than if the current game continued”. 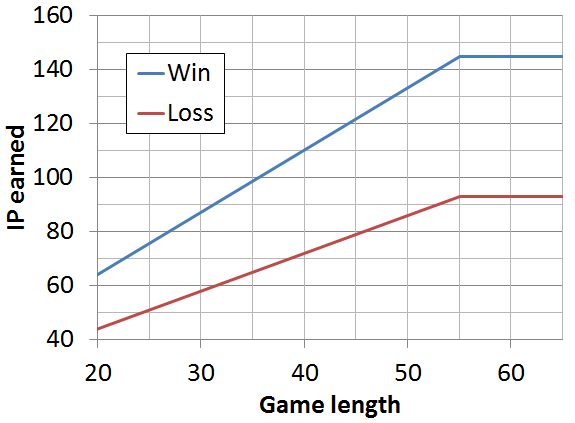 Riot Games has designed their IP system to reward playing the game to completion and to reward longer games:

Q: Will I be getting more or less IP and XP as a result of this change?

While you do get a bonus beyond the “per minute IP”, that bonus is designed to compensate players for the time between matches:

Q: It seems unfair that I spend 5 minutes milling around in queue and in champion select, and don’t get an IP/XP reward for that. Does this system help with this at all?

A: Actually, it does! All game types give a slight ‘completion bonus’ that is equivalent to several minutes of play. This is embedded in IP you earn.

That being said: provided you could get into another game in substantially less that 7.8 minutes, you’d make out slightly better by surrendering and starting a new game. You’d have to do this a lot to see a substantial gain, however. If it took you longer to get into the next game, you’d actually incur a loss overall.

In short, it’ll usually be best to play to 55 minutes, then bail out if you’re very likely to lose. At that point, you’re essentially playing to see if you’ll get 145 IP vs 94 IP. If losing seems like a foregone conclusion, then you’re mostly playing for the experience at that point.