I notice that in Tropico 4, once my city starts becoming large with ~350-400 people, my teamster’s AI starts going berzerk. They leave all my goods in the factories and don’t bother exporting even when I build many teamster offices.

After some observation, I believe that this is because the large city size and its complicated road network confuses the AI; they tend to use very, very suboptimal route choices. For instance, on the game I just played, they decided to resupply my factories using the port on the other side of the island, even though there’s one right next to their office!

This answer is courtesy of FritoPatata’s excellent guide which you totally should read on optimizing traffic in Tropico 3. Everything still applies in Tropico 4.

His key insight is that:

Hence, it is necessary to give the teamsters priority on the fastest transportation route on the island, while minimizing tourist traffic (by placing the tourism district separate from the main city) and building residential buildings within walking distance of the factories to encourage workers to walk to work:

The main thing I am advocating in my model, is a clear and
traffic-free route for your raw materials to make it to the factories
and the finished goods from the factory to the dock as quickly as
possible. Thus, it is important that you make every effort possible to
provide a continuous stretch of road from raw materials, through
production, all the way to export with as few intersections as
possible. While it is important for your people to get to and from
work as quickly as possible so they can produce and refine the goods,
they often work in shifts, and usually half of them will be working at
any given time (averaged out). But, all the production in the world
doesn’t mean anything until those goods get to a dock.

He provides the following design (which works quite well): 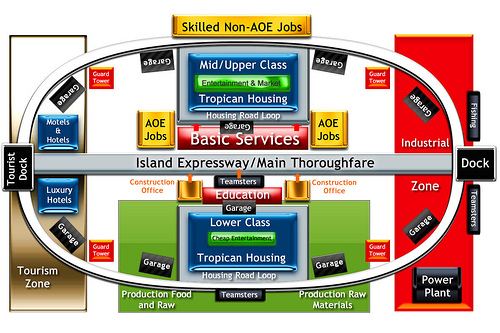 The reason for the circular design is because the intersection logic in the game is bad and can lead to gridlock (and confusion for the teamsters as in my case).