When I was a kid I stumbled upon the secret blue rupee room in Legend of Zelda – A Link to the Past for the SNES. I was ridiculed at the time because I couldn’t reproduce it. I remember in the dialog box that appears when you enter this room that it was placed there by someone called Chris Houlihan.

How do you get to this room in the game?

The Chris Houlihan room is named after the winner of a contest Nintendo Power ran in 1990 to have your name in an unnamed upcoming game. The existence of this room remained a secret for many years after the game was released. 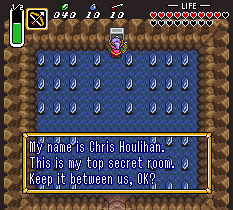 The game is actually programmed to transport you to this room as a fallback condition whenever an error occurs entering a new area. This means while it’s possible to randomly stumble upon it accidentally, it’s an incredibly rare event. However, there are at least a few reproducible ways to reach the room. The YouTube video eldarerathis linked to shows a few.

In the GBA port of LttP, the room data remains in the game, but it’s no longer reachable without hacking the ROM. The Chris Houlihan reference was also removed from the text.