I have just started my first run of Legends of Grimrock. I have in my party an insectoid mage with 3 points in Ice Magic. The tooltip shows me that, at level 3, it should have a spell, marked with 3 question marks (???). How can I know which spell it is and how to cast it?

First of all, you need to discover the rune combination for a certain spell to cast it. In-game, you do this by finding scrolls, but you can also discover combinations via experimentation (or searching the Internet). For instance, I discovered the rune for Fireburst through experimentation before I ever found the scroll. Likewise, I experimented and found that the first earth spell just uses a single earth symbol. I imagine ice and wind do the same thing, but haven’t had the skill to try them yet. 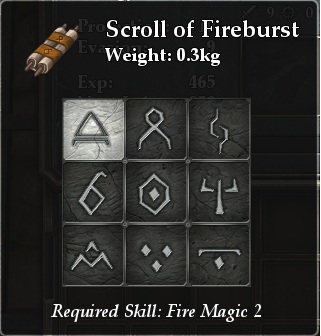 However, even if you know the correct rune combination for a spell, you still need to have a high enough skill level in the relevant magic type to cast the spell. That’s where the ??? comes in when you’re looking at your magic skill levels. Once you’ve successfully entered the correct rune combo for that spell, the ??? on your skill description will change to the name of the spell. 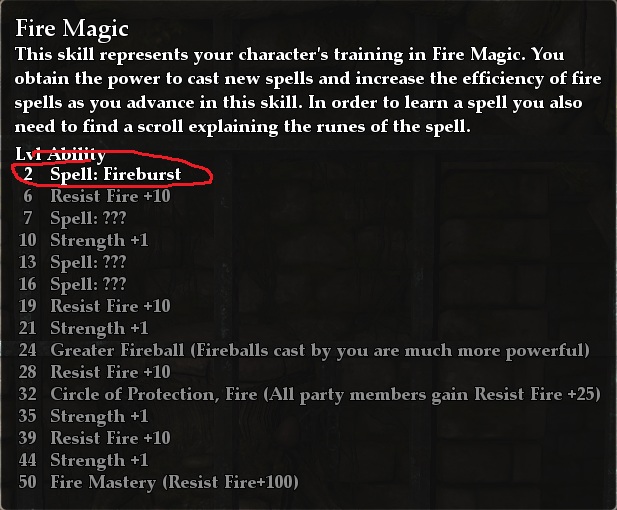 Regardless of how or when you discover the rune combo for a spell, you can still only cast spells that your skill is high enough to have “unlocked”, and your skill text won’t tell you what spell it lets you cast until after you’ve already cast it. It’s a bit frustrating, since I took earth magic hoping it would have some a low level healing spell, as many games seem to tie “healing” to “earth”. Instead, I discovered through play that the first Earth spells is actually “poison cloud”.

So, via in-game means, you’ll just have to discover it as you go. If you want to be able to plan ahead where to put your magic points so you can get to certain spells sooner (and for that matter, even know what spells exist), you’ll have to look to an external source such as this one.

For reference, here are the available spells: