Actually I am against spending money for hearthstone, but somewhere I read that C’Thun will be in the first card pack of Whispers of the Old Gods one opens.

Unfortunately I cannot find it any more. Is it true? And if yes, are there conditions which have to be fulfilled, e.g. the card pack has to be pre-purchased and/or bought for money? Or can I wait until Whispers of the Old Gods is released and buy the pack for gold?
If I just had to buy one single card pack to get C’Thun, it would be worth considering… 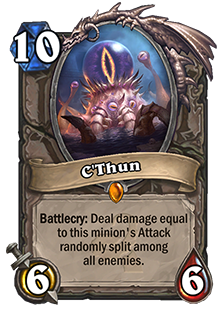 One C’thun and two Beckoner of Evil cards are rewarded after you acquire at least one pack of Whispers of the Old Gods and enter the “Open Packs” screen.

This will remain in place for as long as Whispers of the Old Gods packs are available, presumably, since the stated reason for the promotion is so players can use all the common and rare C’thun synergy cards in the set without having to worry about spending dust or money to get the centerpiece. In addition, the normal versions of these cards are presently uncraftable.

During the launch window of Whispers of the Old Gods, logging in will reward you three free packs of the set, so you will not need to spend any money or in-game gold to get C’thun if you take advantage of the launch promotion. This began on the Whispers of the Old Gods launch date, and the packs are awarded when you log in to the game. An end date has not yet been announced.

Both of these promotions were revealed at the Whispers of the Old Gods announcement press event, according to BlizzPro.

During the Hearthstone live-stream on April 21st, two more promotions were announced:

These promotions show up as “Legendary Quests” in your quest log. If you already had three active daily quests, they replace the quest on which you had the least progress, or the least valuable quest if you had no progress on any of them.