In destiny, when loot drops is it specific to me or can anyone get it? Meaning do only I see it or does everyone see it? If everyone sees it can we all pick it up or is it first come first served. Are ammo drops any different?

Ammunition drops, as well as item drops, are individual. Feel free to run around the field picking up everything you see that glows because it’s all yours! Bungie calls this “Private Loot Streams”, which they addressed in the following
Mail Sack:

When was the first time someone stole your loot from a huge boss that took you a few tries to kill?

If you are asking this question about Destiny, the answer is, “Never!” When we were making the rounds this past summer, we talked a lot about private loot streams. The rewards you’ll earn as you become legend in Destiny will belong to you. No one can take them from you.

Here’s an item by item summary:

Q: If I run out of ammo, is it because my teammates stole all the ammo on the ground?

Nope, it’s because you overspent your ammo. The ammo they pick up is the ammo only they can see. All the ammo on the ground that you see, they can’t pick up, and vice versa.

So if you, or they, run out of ammo, it’s your own fault.

Q: If I don’t get any engrams, is it because my teammates stole them all?

Nope, same rule here. The game will randomly drop engrams on the ground. Too random many say. If you (or they) don’t get a comparable amount of engrams then it’s not because someone stole it, the game has just randomly gone in your disfavor.

Q: What happens if I don’t pick up ammo or engrams? Can my teammates then pick them up?

Nope. Again, everything you see is yours and yours alone. If you don’t pick them up, they’ll disappear once you leave the map. There may be timers involved here to clean up the map periodically but judging by the loot cave videos, it’s not a practical problem if the timer exists.

Note: If you forget to pick up (or perhaps don’t even see) blue or purple engrams, they will be placed at the postmaster for you to pick up later when you return to the Tower. As such, engrams you leave lying around on the ground when you leave a map will disappear, but you’ll not lose out on blues and purples (or exotics, but let’s be realistic, have you even heard of someone getting an exotic out of a purple engram?)

Q: Why did I steal my teammates loot during the strike? I got a gauntlet that clearly was meant for him. 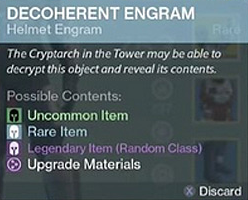 This means that the same rules as described above still applies. The engram was for you, was only seen by you, but there is randomness involved when deciding which class it is for. As such, it may be that the item should be dropped into your vault and given to one of your other two characters, of the correct class.

Weapons are not bound to any particular class so you’ll only see the above text, and situation, with armor engrams.