I am building a 2×3 tunnel for rapid travel (via minecart) through the Nether. The tunnel, in cross-section, looks like this:

I have read this question and the prevailing answer there basically says not to mind the Zombie Pigmen. For me, that isn’t an option because Pigmen can be a bit of a showstopper to minecarts in my tunnel. 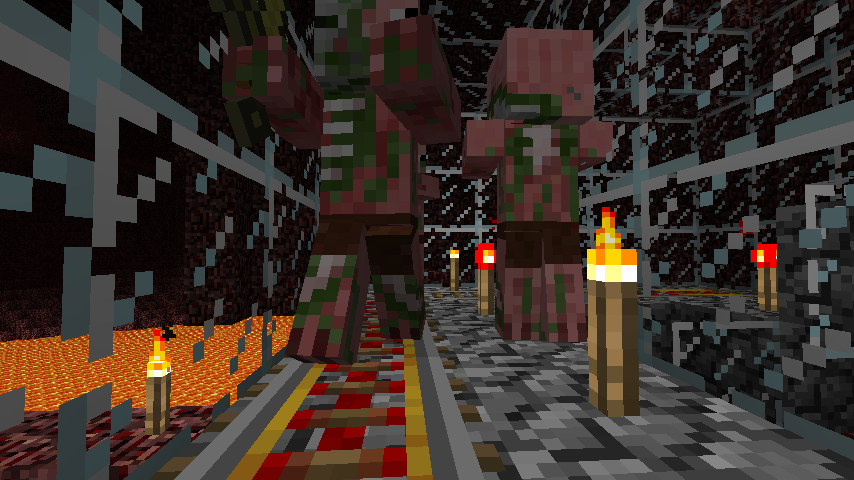 They spawn in the tunnel, as opposed to walking into it (this seems to be consistent with the Wiki article on Zombie Pigmen, which merely says they can spawn at “any light level”. They’re a problem because they appear in groups of 2-3 and prevent minecarts from moving along the track.

I have thought of a few possible ways to deal with this:

There’s also this design, found in a Minecraft Forums thread:

Nobody can spawn (or walk) on your track, and the glass also keeps you from attracting ghasts. It’s very relaxing riding across the netherscape in the apparent open, watching ghasts fly about overhead unaware of your presence.

I haven’t yet tested it, but I would hesitate to embrace this design, as it seems like it’s an exploit that is liable to be “fixed” in any given future update. (I just re-did about 4 km of track that was previously powered by exploiting the minecart collision bug/feature, and I do not want to go through that kind of thing again.)

Is there any non-exploit, modless way to keep my tracks clear of Pigmen? I should add that this is in the context of SMP, and I don’t want to turn spawn-monsters off either.

Since version 1.5, this hasn’t been much of an issue, as that release introduced a rule in the mobs’ AI to avoid rails unless they are chasing after the player. Although I have still found Zombie Pigmen appearing on the tracks, this is now not as much of an issue as it was in previous versions.

Zombie Pigmen are able to spawn on rail tracks, so removing the walking path on the side will do nothing. But as has been mentioned, adding blocks above your tracks will prevent them from spawning and help keep them from walking onto your tracks 100% of the time. This is a common “fix”, and has been around for quite a while, and it doesn’t seem like the developers have any plans to stop this fix from being possible.

The following blocks can safely be placed above the tracks, and will not suffocate you:

There are other blocks that would work, such as Beds, Chests, TNT, or Enchantment Tables, but I have excluded them from the list due to being impractical.