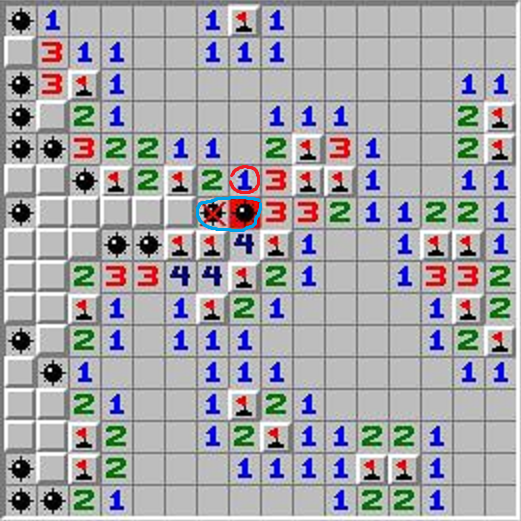 In the above game, look at the cell circled in red. It says 1, which means it must have only one neighboring cell which will have a mine. However, there are two cells which have mines surrounding this cell, circled in blue.

How is this possible? Is this board inconsistent, or have I misunderstood the rules of the game?

The board is consistent, but your logic is flawed: you’ve added a flag to a non-mine space. That’s what this crossed out mine means:

Incidentally, the mine with a red background is the one you triggered. Other mines that are displayed at the end of the game are ones that you haven’t flagged yet. The remaining flags were correct – they mark the space of a mine.

I assume the board area looked similar to this before you clicked (you’ll have to excuse the quick MS paint mock-up):

Yellow arrows represent ‘solved’ mines. Purple diamonds represent safe squares (the ‘2’ above them already has two mines associated with it) so that just leaves the question marks as the ‘unknowns’.

Note the ‘2’ in (R6,C7) already has one solved mine (which you correctly flagged) next to it at (R6,C6). This means that the clicked mine (red background) and the mis-flag (crossed mine) could not both be mines: 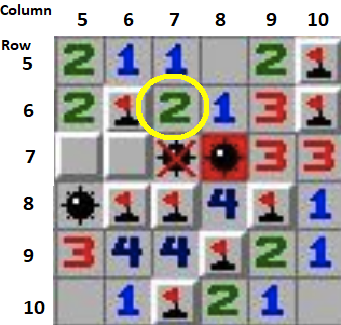 From the position of the ‘2’ and ‘1’, both of those squares had an equal chance of containing a single mine, thus they weren’t logically solvable before the detonation.

However, the ‘3’s in Column 9 (Row 6 and 7) would have confirmed that the square you clicked (R7,C8) had to be a mine; there’s only 3 unchecked positions surrounding them, two of which you’ve flagged already, therefore leaving the detonated mine as the final position: 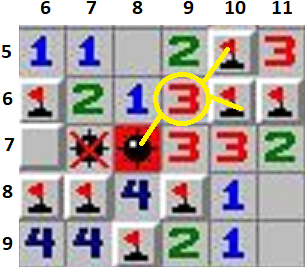 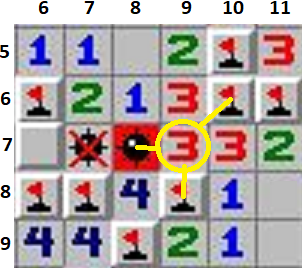