My city is 1500 years old. It has 1.8 million citizen, 800k businesses and a small industry (around 9k). It’s a thriving town running on a $4.5 million yearly budget. It’s pretty developed; the crime and pollution rates are low, education and health are pretty high and it has a decent infrastructure (buses and rails account for 20% of traffic). The city is connected to many other cities, it outsources industrial jobs, electricity, water and garbage. It has an airport that handles over a million traveler.

Here is how it looks like from the sky. It’s pretty crowded: 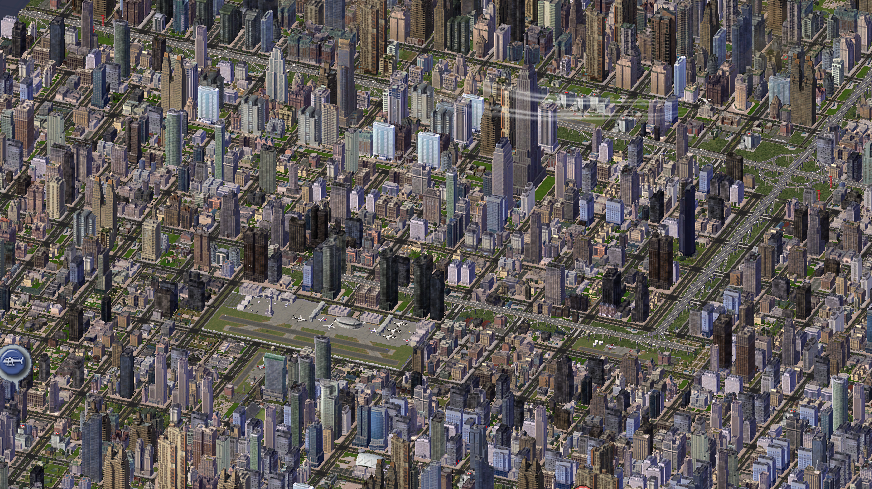 And this is only a small part of the whole thing.

But there is a problem here: Technically, and from my estimates, my city can handle up to 3 million citizen and 1.5 million businesses. But it’s not. However, it has entered in a chronic recession that no stimulus can escape it. My only escape to the decline of the city is to raise taxes which only worsened things.

Taxes for the poor are at 20%, and 8% for the remaining. Businesses have taxes from 8% to 20%; and the small industry is taxed 8%. When I started the city, the taxes were a lot lower, but since the recession hit (at around 2.0 million population); I had the raise taxes to face the budget deficit.

I have tried taking all taxes to 0; but this only ruined my thousands’ year savings. The city couldn’t get alive again. There are dozens (and maybe hundreds) of empty business and residential buildings that could handle a couple more millions of population.

Planning new parts, making projects and things doesn’t work; The effect is negligible to the whole. I think the solution is an economical reform but SimCity has poor settings in that area.

How can I bring my city out of this recession?

Here is an update with more relevant information. (I’m not sure how to get the file of the city, any tips?) 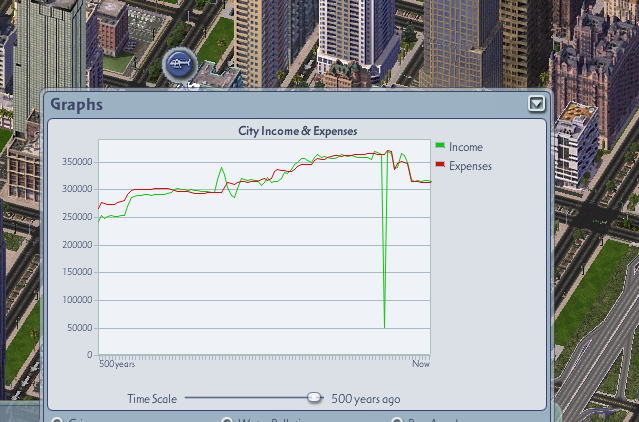 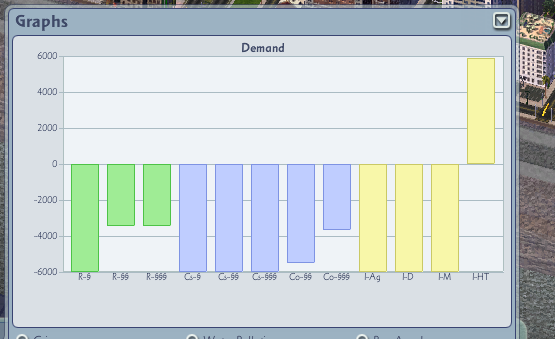 If all your industry is in neighboring cities, the cause of your problem could be that one of your transit connections got accidentally severed. If residents can no longer get to their workplaces, they’ll move out, lowering population and commerce. This could result in the depression you’re seeing.

If there are no problems with your transit network, then I don’t know what might have happened. To be honest, I’ve never made a city as big as yours, but from my experience dealing with depressions in smaller cities, the best advice I can give you to get out of this depression is always obey the demand graph.

You say that demand is “low” for residential and commercial property. This is false. The demand is wildly negative. Negative demand means your city has more buildings of that type than its present economy can support. In time, if you can provide enough industrial jobs, these buildings may come back into use. However, if your city isn’t going to survive that long, then you may need to bulldoze these unused buildings, and rezone with something your city will fully utilize (HT industry, in this case).

Your sims want high-tech industrial jobs – if you provide new HT industry, this will create new jobs. This should hopefully create a ripple effect – new industry provides new jobs, new jobs will provide new residents to fill up the empty residential space, new residents will buy things and boost local commerce. It will take time, but keep building what your city demands, and the economy should improve. Playing with taxes doesn’t solve the problem at hand – your city wants more high-tech industrial jobs. Without available jobs, sims will not move back in to fill any of your unoccupied space.

You can certainly try to continue outsourcing industry to surrounding towns, but make sure you’ve got a good transit network if you’re going to do this. If the industry is too far away from your residences, your sims may not want to make the commute all the way out there. A good transit network lowers commute times and allows your sims to travel farther away from home to get to their jobs. Trains and Subways are great for moving large numbers of people long distances.

If you don’t want to optimize the transit network to let your sims commute to out-of-town industrial jobs, then you’re going to have to get rid of some residential and commercial property, and replace it with industry.

Long story short, build more high-tech industry, make sure your sims are able to commute to your existing high-tech industry, and if you need to, tear down some of your empty buildings to make way for new industry. They’ll never elect you sim-president if you can’t prove you’re a job creator!