I am trying to put a large (?) rocket into orbit, but I am still having problems which I believe are of aerodynamic nature. However, with the ever-changing model of aerodynamics in KSP (I’m using v1.7.0), much of the advice I read on this topic is either outdated or too simplified to be complete.

I have a four-stage rocket, with my payload consisting of the mobile processing lab an inline wheel and some scientific instruments in a bay. 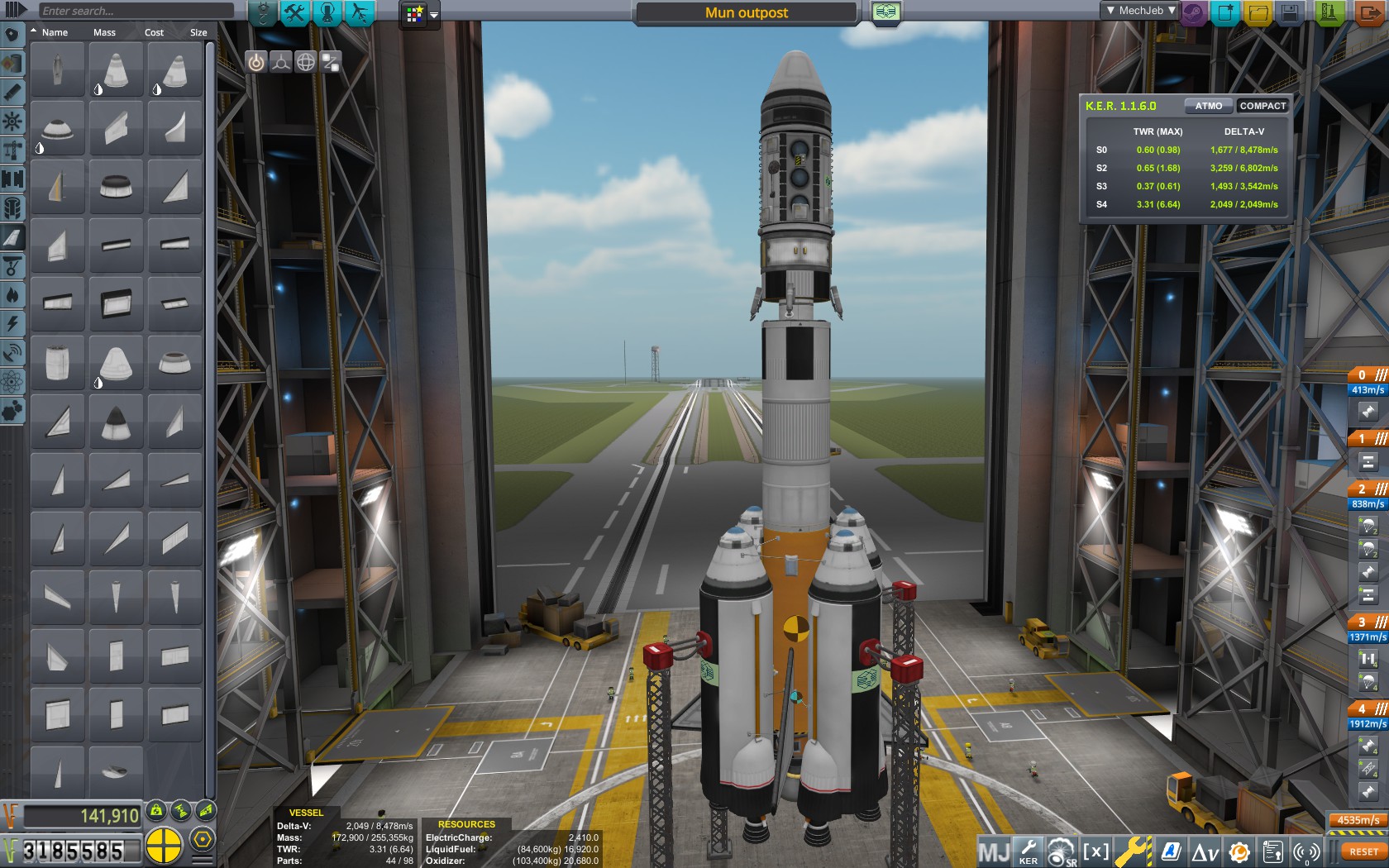 I realize that a rocket like this is overpowered for a Mun outpost (as it’s named), but for the sake of this question, please assume that I need this much δ-v for some other reason.

As I understand, the center of lift should be below the center of mass (gravity) and this is what I believe I achieved using wings.

I tried many other, but similar designs.
For example, I enclosed the thinner part of my rocket and the landing struts into a fairing. I also tried to use more wings, larger ones (like delta wings), put elevons on them, and tried different placement configurations (only on the main thruster in the middle or the boosters on the side etc.) 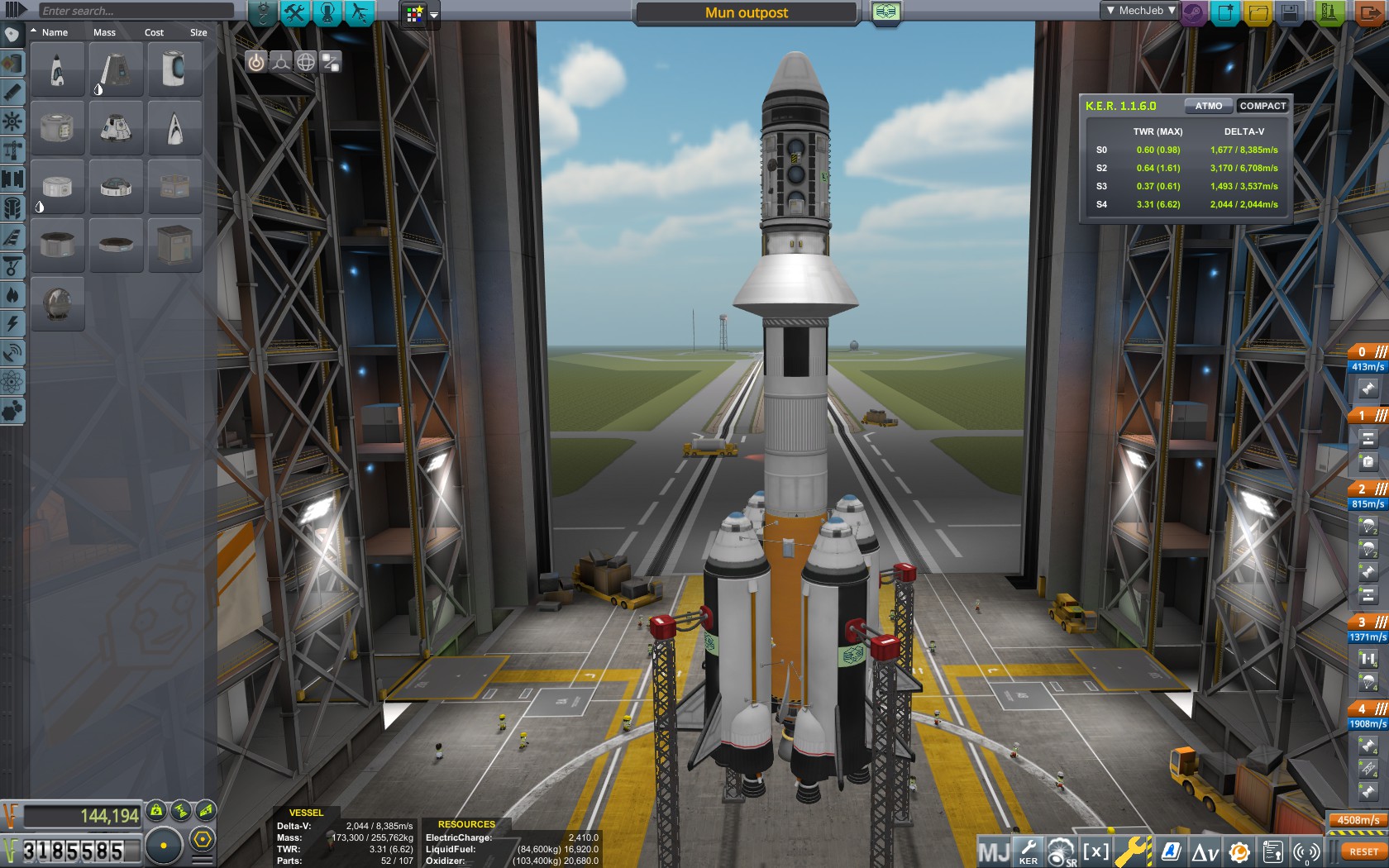 Inevitably, the end result is the same. As soon as I reach a couple of kilometers and around 300 m/s of velocity, my rocket starts flipping over uncontrollably. With some designs, it is also spins around its z-axis, but I was able to reduce or eliminate that.

This happens both when I control the rocket myself and when I use MechJeb to launch it, so it cannot be due to my poor flying skills.
The usual advice to “slap some fins on it” is also clearly not sufficient here. I also know that protrusions can negatively affect the flight performance of some rockets.

How can I successfully fly a rocket like this? Are there other factors apart from aerodynamics that contribute to my failure?

You’ve got a lot of draggy parts on your upper stage. Here’s a screenshot of the moment when things started going wrong in my test flight, with the aerodynamic forces overlay active: 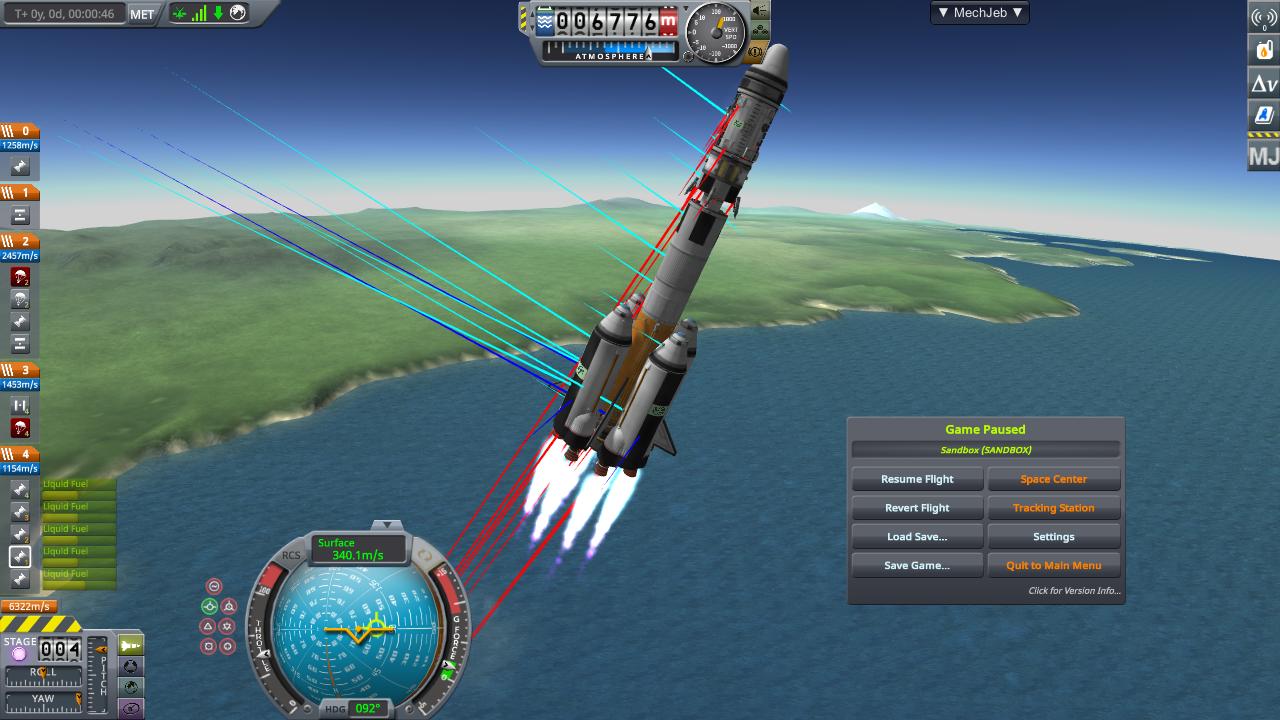 Notice all those red lines coming off the upper stage? Those are drag force vectors, and they’re what’s trying to flip the rocket over. (The blue and cyan lines represent wing and body lift forces respectively.)

Some of those red lines are coming off the various solar panels, antennas and landing gear attached radially to your upper stage. All of those “warts” on your nicely streamlined cylindrical rocket are causing extra drag. Another source of drag is the Terrier engine on your upper stage, which is only half the radius of the rest of your rocket. That causes the (partially) exposed flat ends of the fuel tank above it and the decoupler below it to create a lot of drag — almost as much as you’d get if you took the nose cone off your rocket and tried flying it with the blunt end exposed.

The VAB center-of-mass / center-of-lift display is kind of misleading you here. Sure, the center of lift on your rocket is really low, because all the wings are on the bottom end. But what mostly matters for aerodynamical stability is the center of drag, and the VAB doesn’t show you that. In any case, the drag created by various parts depends non-linearly on airspeed, so it’s quite possible for a rocket to be stable at low speeds but lose stability as it starts going faster, like yours does.

I tried replacing the Terrier engine with a Poodle, but while that helped a little bit, the result still wasn’t quite stable enough to get to space. Fortunately, there’s an even simpler solution — just wrap a fairing around the entire upper stage: 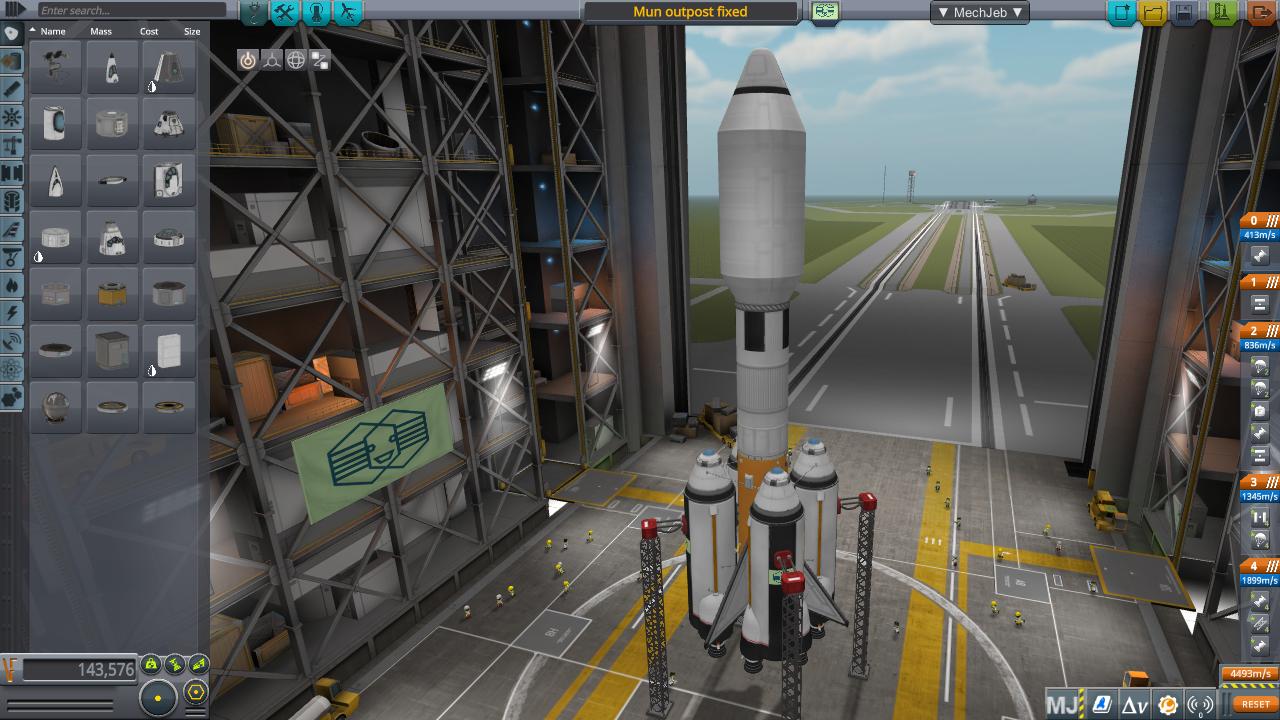 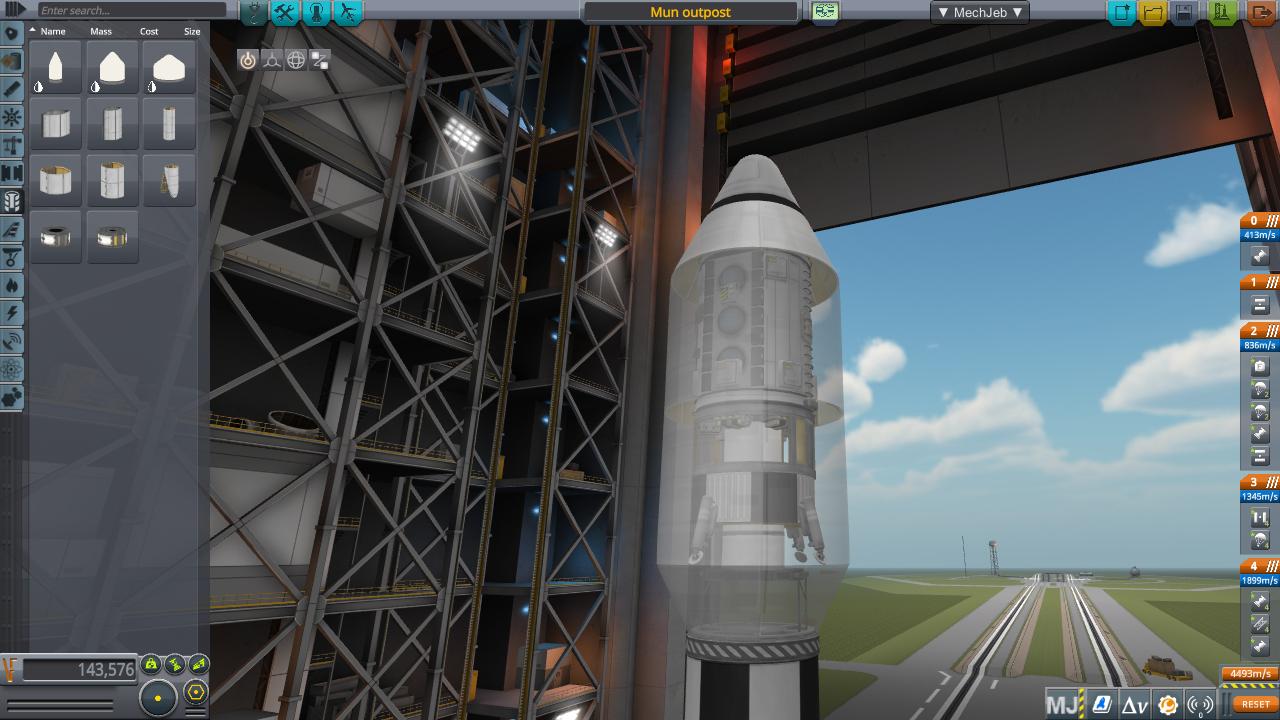 I also used the interstage nodes feature of the fairing to raise the decoupler and the upper stage a bit higher, so that I had some extra room to gently expand the fairing to accommodate the landing legs. I believe the drag model for fairings does take the shape of the fairing into account, adding extra drag if the radius changes too abruptly, so you’ll want to try to keep your fairing shapes as sleek and streamlined as possible.

With that simple change, the rocket flies just fine: 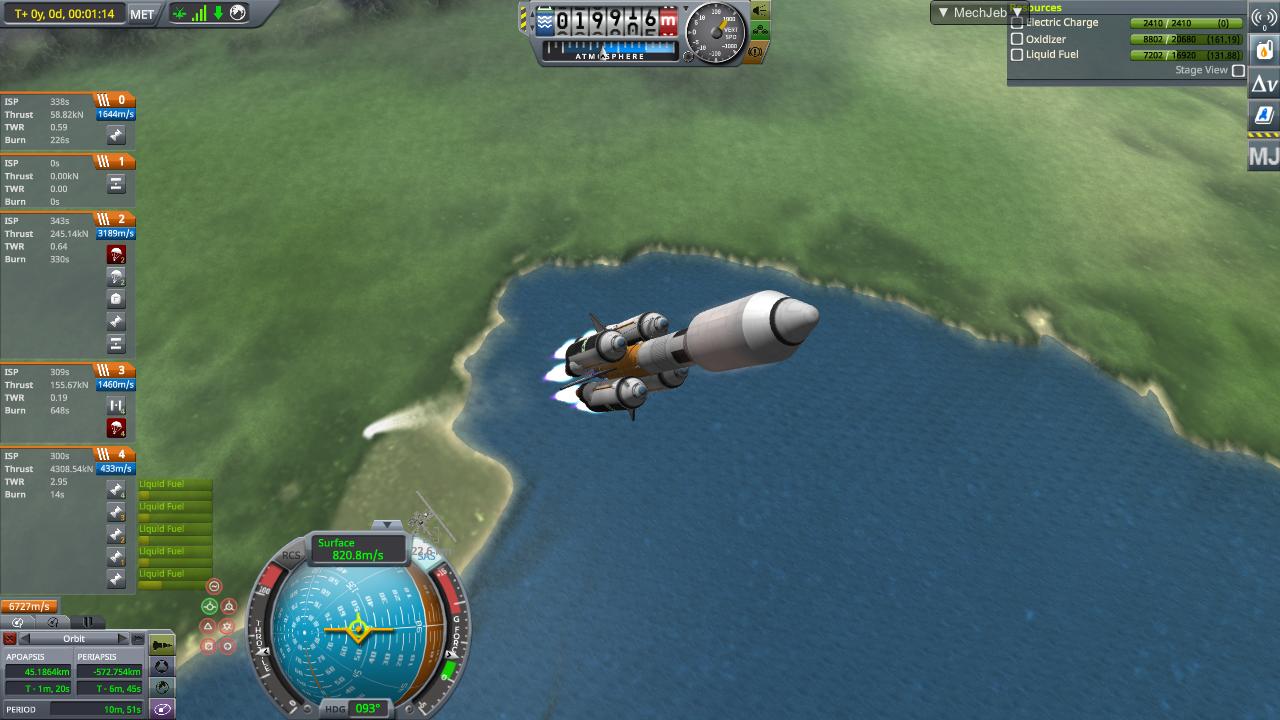 In fact, with the delta-v I had left after reaching LKO, you could probably fly that thing all the way out to Eeloo and land it there: 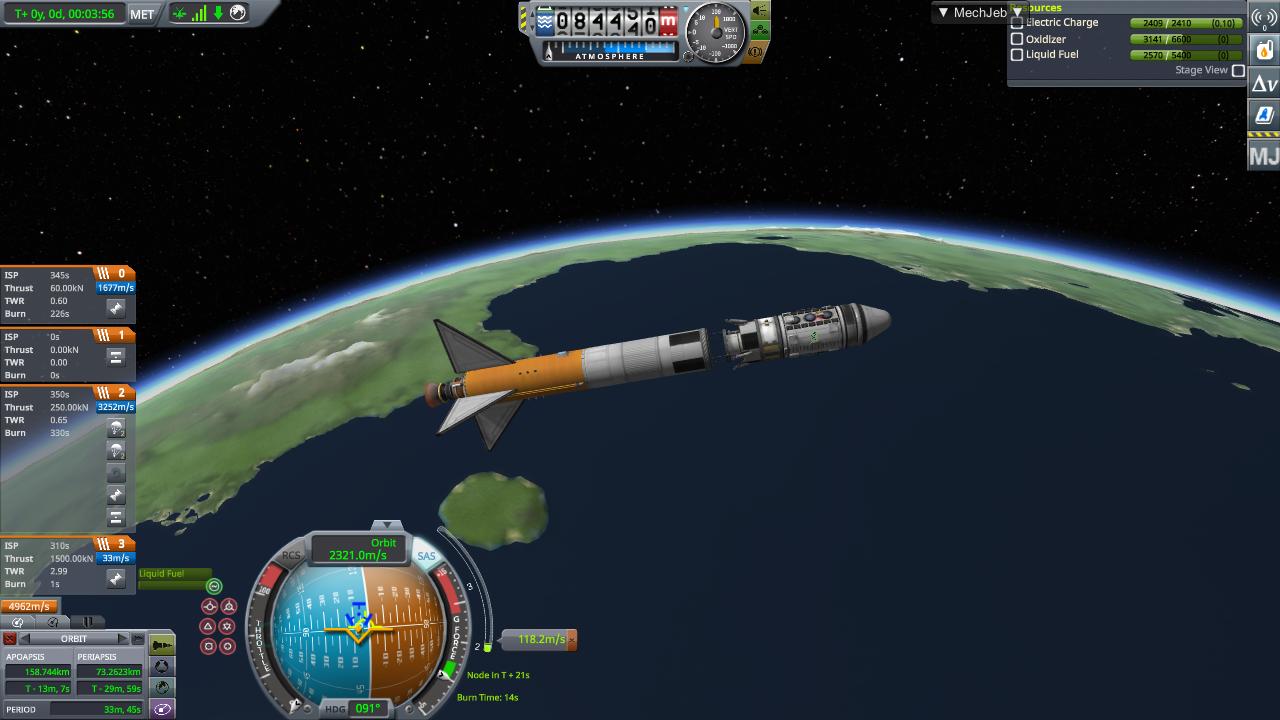 (You’re also kind of overkilling it on first stage thrust — I found it much easier to fly the ascent at only half throttle. And that’s even with the Mainsail engine’s thrust limiter lowered down to 20%, like you had it.)

Anyway, here’s the fixed version of your rocket with the fairing, if you’d like to test it. You’ll probably want to move the fairing deployment a bit lower in the staging order, or just do like I did and manually deploy it after getting into space.