It’s been a while since I uploaded my latest screenshot to Steam, because mere 4 gigabytes of cloud space granted by Valve got exhausted really fast. In the meantime I still continued to take screenshots, with Steam and with other tools, saving them locally and patiently waiting when upload limits are increased, so I can upload all this stuff again.

And the screenshot space finally got increased to whopping 20 GB! This means we can now upload tons of screenshots we made since the last cloud space bump.

But unfortunately something has changed and now I can’t upload any old screenshots. I wrote “custom” in the question’s title, but in my case screenshots are custom basically because they were taken with some third party utility or even with PrtScr and Ctrl + V.

The new naming scheme is YYYMMDDHHMMSS_1.jpg, files are still saved to C:\Program Files (x86)\Steam\userdata\<user id>\<some number>\remote\<game id>\screenshots, and when you place your custom screenshots to this folder, Steam screenshot uploader sees them, creates thumbnails, but refuses to upload. Now it only uploads screenshots actually taken with Steam.

So guides like this one became obsolete. The notorious “Steam Cloud may be temporarily unavailable” error appears. I’m sure custom screenshots still can be uploaded, but the whole process apparently now is more tricky.

Anyone able to crack this for us screenshotheads?

The process of uploading a (custom) screenshot is similar to what it used to be.

First find the relevant folder for the game you want to upload screenshots for. This is usually something like C:\Program Files (x86)\Steam\userdata\<user id>\<some number>\remote\<game id>\screenshots\. Refer to this guide (also linked in the question) if you still need help finding the game id. Put your screenshots in that folder. Open steam, right-click the game and click “Show screenshots”. Let it load all the thumbnails. Exit the dialog, then exit steam completely (by right-clicking the notification icon and clicking “Exit”).

Go to C:\Program Files (x86)\Steam\userdata\<user id>\<some number>\ (that is a few folders above the folder you put your screenshots in, and open screenshots.vdf in an editor that respects both windows and unix line endings, such as VIM or Notepad++. Now find the entry for each of your screenshots. In my case I was searching for the screenshot 20160809224314_2.jpg. 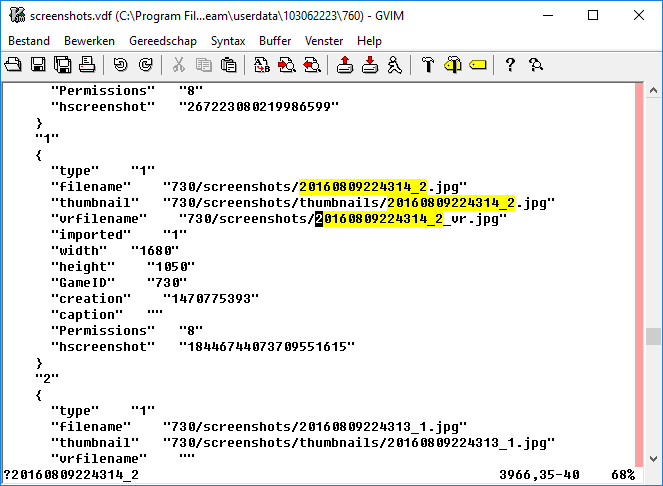 The problem you encountered is because Steam now fills in the vrfilename entry with a non-existing file. Remove that filename so that it says "vrfilename" "". You might need to set imported to "0" depending on if you tried to upload it before. 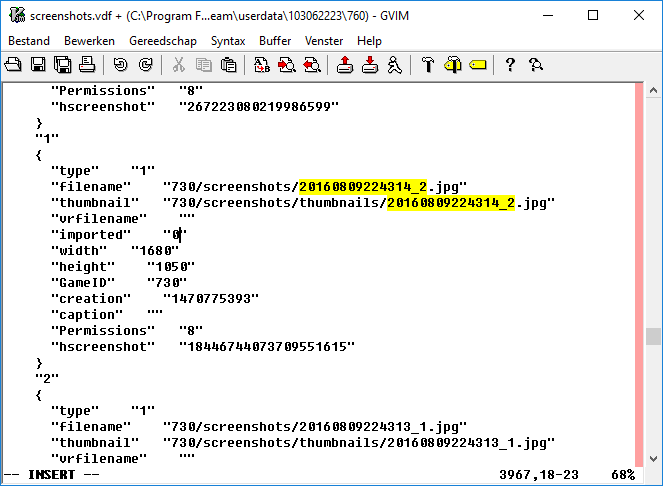 Save the file, then start steam again. Right-click the game again, then click “show screenshots”. It now should allow you to upload your image.