While I was downloading Earthlock: Festival of Magic AVG popped up: 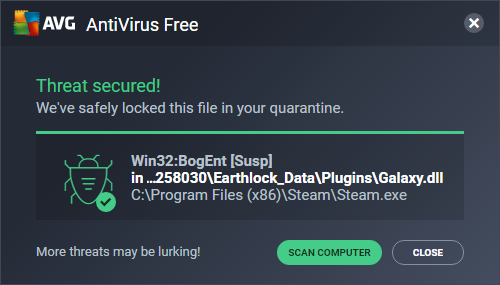 I suspended the download of this game until I could confirm if the game is safe.

I know that sometimes Anti-Virus might give false positives when an innocent file does something similar to a known Virus, but when it comes to PC safety, I can’t always give the benefit of the doubt.

I am wondering however, should I be concerned for Viruses when I download through Steam? Or is this just a known false positive and downloading through Steam is actually safe?

win32.BogEnt is a known false positive for digital download games. It should be fine to play this. win32.BogEnt is a heuristic-based indicator. This is not based on the scanned file being known to the software as a virus, but rather the software doing some analysis on the file and deciding that it MIGHT be a virus based on stuff like it sharing certain code fragments with a virus, or it might use rarely used instructions, or it might be run in a contained sandbox environment to see what it does. Heuristics frequently give false positives.

The overwhelming majority of games on Steam are pretty safe to download, especially if they’re already on there for a couple of months. However, some games get bundled with invasive DRM, although that’s not really a virus.