I’m tweaking the settings in DiRT 2 and I’m presented with these choices (in order) for multisampling:

I assume those without text on the nVidia panel are probably MSAA.

The naive guess would be bigger numbers are visually better. But then MSAA, CSAA and QCSAA come in to play (presumably different methods of performing AA) and confuse matters by not being in the right order.

For example is 8x / 8x MSAA “better” than 8x CSAA somehow? Otherwise why would it be further down the list on the nVidia panel? And is 8x QCSAA “better” than 16xCSAA as per the order in DiRT2?

In terms of image quality, performance and any other quirks,
what are the differences between the various types of AA?
I’m not asking about the algorithmic/implimentation differences; that’s probably off-topic anyway.

This is a great question because other than “is AA on or off?” I hadn’t considered the performance implications of all the various anti-aliasing modes.

There’s a good basic description of the three “main” AA modes at So Many AA Techniques, So Little Time, but pretty much all AA these days is MSAA or some tweaky optimized version of it:

This Anandtech article has a good comparison of AA modes in relatively recent video cards that show the performance cost of each mode for ATI and NVIDIA (this is at 1920×1200):

So basically, you can expect a performance loss of..

There is indeed a visible quality difference between zero, 2x, 4x and 8x antialiasing. And the tweaked MSAA variants, aka “adaptive” or “coverage sample” offer better quality at more or less the same performance level. Additional samples per pixel = higher quality anti-aliasing. 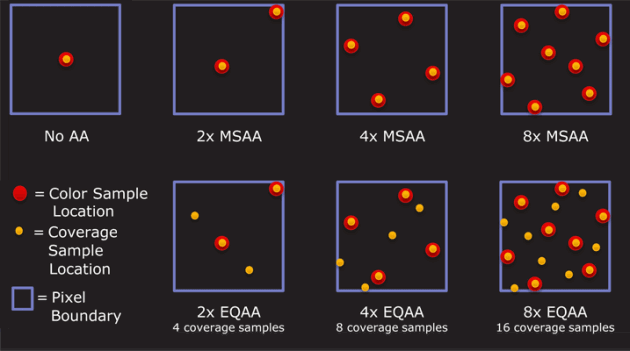 Comparing the different modes on each card, where “mode” is number of samples used to generate each pixel.

In my opinion, beyond 8x AA, you’d have to have the eyes of an eagle on crack to see the difference. There is definitely some advantage to having “cheap” 2x and 4x AA modes that can reasonably approximate 8x without the performance hit, though. That’s the sweet spot for performance and a visual quality increase you’d notice.