Certain potions and talents can increase ‘sign intensity’, while many others increase sign damage. The damage increase seems pretty straightforward, but what does increasing the sign intensity actually do? Those seem to be separate effects, as seen in the bonuses section of the character abilities screen.

Sign intensity seems to have a base value of 1 and the following ways to increase it:

Does it also increase damage of Yrden and Igni? Does it affect the chance of stun for Aard, the chance to immobilize for Yrden or the chance for success of Axii? And what does the value mean, how much effect does it have if I get a talent that gives me +1 on sign intensity? 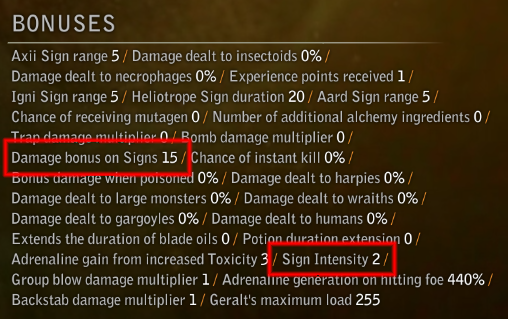 In my experience, Sign Intensity makes the signs stronger, but in separate ways than upgrading the spells via ability increase.

Unlocking Aard rank II and II means that you can cast farther, and affect multiple targets at once.

Increasing the Sign Intensity of Aard gives it a chance to inflict knockdown (the status effect, as opposed to simply knocking them down) in addition to whatever stun chance Aard innately has.

Increasing the Sign Intensity of Igni gives a much appreciated damage boost. With +2 Sign Intensity, my Igni’s are dealing about 30 damage per, instead of the lackluster 6 they do with +0 intensity.

I’m not sure what effect Intensity has on other signs, yet.