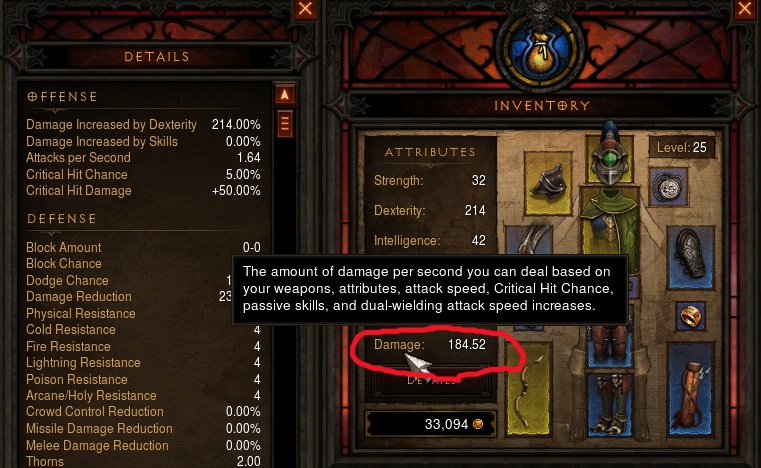 The Damage stat on the character sheet is… not very well explained. I have trouble understanding why some items make it go up or down. It says I do 184.52 damage, but my weapon only does 34 DPS and does 8-41 damage per hit.

What is the formula behind this stat? What does it actually represent? Damage per Attack? Damage per Second? Some abstract constant? And what does this have to do with the damage done by my abilities?

First off, it factors in the bonus to damage from your characters primary Stat. We’ll refer to that as S from here on out. S is a multiplier equal to your Strength, Dexterity, or Intellect as appropriate.

Next, it accounts for your chance to get a critical strike, as well as the magnitude of bonus damage gained from Crits. We’ll call this C. Because we’re accounting for the average amount of damage gained from crits, we can just multiply the crit damage by the crit bonus (as percentages) to get the multiplier. My Demon Hunter doesn’t have any gear or talents that modify her crit chance or damage, so that makes the math here easy.

Next, it accounts for Weapon Speed. We’ll call this R for ‘Rate of Fire’. This includes any modifiers that increase your Attack Speed, such as the bonus earned for dual wielding, or from having a Quiver equipped in the case of my Demon Hunter, I have a Quiver, and an Amulet that provide a combined 17% bonus to my bows base attack speed of 1.4. Fortunately, we don’t have to do any math here. The character sheet flat tells me:

Now we come to the big one. Average Damage, which will abbreviate as A in our formula. What we want here is the Average Damage done by every single shot. This includes bonuses such as those from the two Rings of Wounding (+2-4 Damage each in my case), and the Amulet of Wounding (+3-6 Damage in my case) that my Demon Hunter is wearing. So we take the base damage range of 8-41, and add on two bonuses of 2-4, and another of 3-6. We can just add all the minimum and maximum numbers together here, to get 15-55. Remember not to include elemental damage bonuses that are on your weapon – these are already included in the weapons damage range as displayed! Average the two to find A. Dual Wielders, remember to apply all the appropriate bonuses to both weapons – you’ll be averaging four numbers if you have two weapons.

Finally, you multiply this by any other percentage modifiers that you might have from talents. We can call these M. My Demon Hunter doesn’t have any of these as I’m set up right now, but if I were to use the Archer talent, that’d be a 15% bonus, making

Then we just do some multiplication!

We can account for the discrepancy because we took the character sheets word for the Weapon Speed stat, rather than calculating out the +17% modifier there ourselves. If, instead of using 1.64, we calculate out the weapon speed ourselves, we get R = 1.638, and then we see our expected result: 184.52

Now, it’s important to note that, among other things, this number doesn’t tell you how hard your abilities will hit. What it does give you a ballpark for is, if you fire off the same ability constantly, how much damage will you do?

But what if you do want to know how hard Evasive Shot will hit? After all, it does 125% of weapon damage. But what does that mean? Well, we can use our existing variables – we just need to remove C and R from the equation – C is still helpful for getting an idea of how much damage ten Evasive Shots will do, and R will tell us how fast we can fire them off – both important if we want to know how much damage we can do spamming Evasive Shot, but to know how hard an individual ability will hit, you can use this formula:

Where E is the percentage modifier applied to your weapon damage by the ability. For Evasive Shot, E = 1.25

So, in the case of my Evasive Shot, I can expect it to hit for an average of 137 Damage.

So, what’s the takeaway from all of this for you? Should you care about maximizing the ‘Damage’ stat on the character sheet? The short answer is, for most players in most situations, yes. You can rely on the ‘+ Damage’ comparison tooltip to tell you whether something is an upgrade. The primary edge case where you might need to pay close attention to this is if you get a lot of your damage from an ability that you can’t or don’t use very often – if you can’t spam an ability, R becomes much less important to you, and you should take into account that while the character sheet looks at the rate of fire, you might not care about it so much. In these cases, doing the math yourself might tell you that a slightly lower DPS weapon is better – if it hits hard enough to make up for the difference.