I started out building defensive structure around my settlements. I’ve heard settlements can be attacked, I’ve been building the simple turrets. 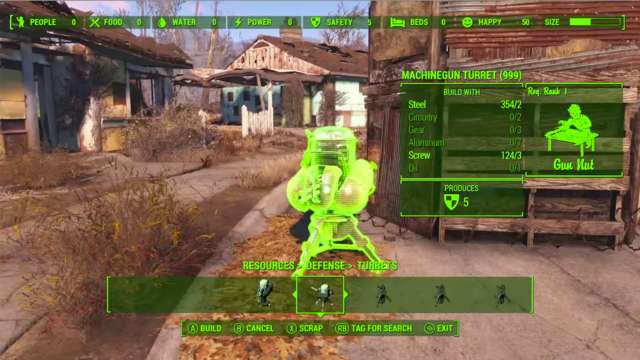 What is an effective defense strategy?

In a raid, are those simple turret effective?

What are the best defensive structures to build to defend against a raider attack?

Does their placement matter?

The best defence is intelligence (not the S.P.E.C.I.A.L stat) and planning.

Don’t build a settlement that fills an area larger than it needs to be, and build a wall around it with a few set entrances and turrets with good vantage points. The taller of the two guard posts are sufficiently tall to see over walls but you’ll need to remember to assign settlers to actually use the guard posts. Building a guard post with a siren next to it will mean that the rest of your settlement are aware of the attack sooner and coordinate their efforts better.

Building turrets that have a good vantage point of these approaches will ensure that enemies start taking fire as soon as possible. Higher level turrets will do more damage, but be aware of the area of effect damage from the missile turrets, because they will kill you and your settlers. The main deal with turrets is that heavy laser turrets are great but require power, heavy machinegun turrets are average but don’t. There’s no point in having a nice array of super turrets that go offline immediately because the attackers were able to take out your unprotected generators.

When a settlement is attacked, you’ll receive a notification regardless of where you are and what you’re doing. If you go to the settlement and help them defend you’ll see that each settlement only has a few set approaches that enemies will take.

For example, Sanctuary will get enemies approach over the south bridge, over the north bridge, and across the river at the low point adjacent to the south bridge. By building turrets and guard posts in these locations you’ll cover any attack regardless of building walls.

As another example, at Red Rocket Gas Station, the enemies will approach from Concord, from over the hill behind the station and from over the hill across the road, or up the hill from the west of Concord. This location has excellent vantage points but very little space, and all of the vantage points are behind the space (and thus you’ll end up with structures between the turrets and the edge of the zone) which, even if they’re not blocking – turrets have a maximum range. Getting turrets up on top of the sign outside the gas station rather than the roof of the gas station provides a significant amount of coverage and would allow your settlement to be build behind the foliage (which is impassable) without exposing it to easy sabotage.

My personal favorite is the Starlight Drive In. It’s a wide open area that gets attacked from the road in the south east corner, the hills in the north and from the west. The road from the south east corner is overlooked by the second level of the main drive in building and this provides an excellent vantage point for turrets. The west is covered by the screen of the drive in which has another slanted roof ideally suited to turrets, leaving you with the north of the settlement where the workshop building is. What I did was just build a wall along that entire side (using metal building walls I could put turrets on top of rather than junk fencing) to cover the north, leaving the entire central area for building a settlement in – which somewhat goes against the “make your settlement as contained as possible” advice but works quite well in this location because of how flat it is.

Each settlement has a number of approaches, varying from settlement to settlement (Hangman’s Alley only has two since it’s an alley…) and getting to know the settlements and how they’re attacked will benefit you greatly in your placement of defences.