I just completed the challenge to get a “Big Ass Score” of 500000 (might be missing a zero or two), and it took nearly an hour of hunting down every high-scoring item to get there.

Now my challenge is 4x that big.

How in the name of Goat God can I get a score this high?

Or, in a more Arquade-friendly way, what are the highest-scoring bonuses that can be found in Goat Simulator, and which of them can be chained together to aid in score-building?

I tried all of these methods today, with the latest version of Goat Simulator.

Speeding Car Glitch: Patched 🙁 Tethering yourself to a car that is going off the map doesn’t seem to help at this point. I got no score whatsoever for glitching off the map using that method. I also tried the truck and got nothing at all from that either.

Low Gravity: Patched 🙁 The Low-Gravity room has been patched, so that now a “low-gravity” modifier is applied to the spins and flips you do in this room. Thus, it is very, very unprofitable.

Licking, Tricking, and Kicking In Dense Areas: Patched 🙁 The maximum multiplier has been capped, and after a short amount of time kicking, licking, and tricking in say, the convenience store by the gas station yields relatively low amounts of points.

Science Hole: Improved Method! The Science Hole (which is in the hills near the low-gravity testing facility) is still a good place to do tricks. However, I found that with the “low-gravity” mutator I was getting very low multipliers. I could still do massive tricks, but I wouldn’t get back down to the fan before my multiplier ran out. This was still the fastest way to get points, however. 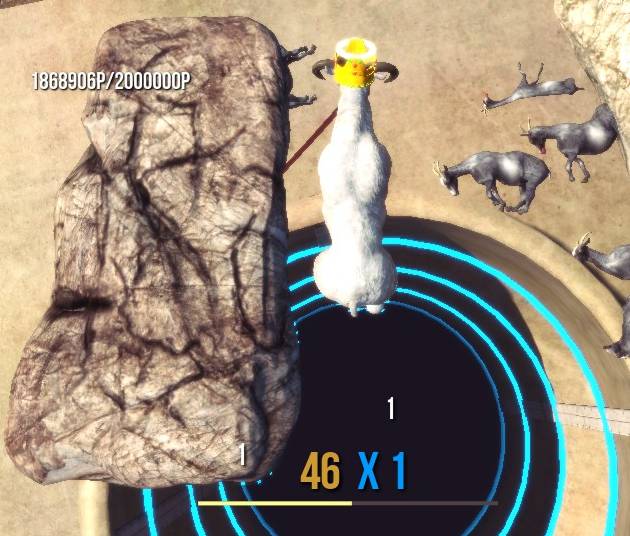 It doesn’t really matter what the stone is doing – it can be outside the hole, jammed in the hole, whatever, it doesn’t make a difference. Just make sure you’re licking it. Now try your Science Hole tricks:

There’s a “while licking a goathenge stone” trick bonus, which is a massive benefit in this area. Just use the standard trick methodology of holding two directions (ie, W and A) and occasionally release right mouse so you can reorient yourself over the hole.

Also, keep the “Jump” key pressed – sometimes when you hit the bottom, you’ll wall run up the side, which increases the multiplier. To stop wall running, release and then re-apply the jump button.

With this method, I was able to get several hundred thousand points in just a few minutes.

Angel Goat Glide: OMGWTFGOAT The “Angel Goat” mutator also gives you the ability to glide by holding R while in the air. This wasn’t clear until I saw the help text in the “Custom Game” screen. With this, you can stay in the air far longer and get much bigger tricks. You can also land on the ground safely, even from heights that would normally cause you to ragdoll and lose your combo.

You can use this to great effect via the following method:

Even just the jump itself is probably enough to get the highest score total. Doing all this other stuff is likely to give you over a billion points with just this one combo.

The downside to the “R glide with Angel Goat” is that you can trick for so long that you overflow the score or something and end up with just 1 point from the trick. So don’t stay in the air tricking too long!