I got it in the Cathedral. Its description:

The witch Adria seeks a black mushroom? I know as much about Black
mushrooms as I do about red herrings! – Deckard Cain 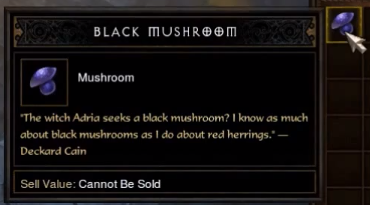 Is there a meaning behind it?

In the release version of the game the item “Black Mushroom” is a component in creating the item “Staff of Herding.” It is still an Easter Egg referencing Diablo 1 though, but also helps in crafting the item.

The full list of items needed to create the “Staff of Herding” are: Black Mushroom, Wirt’s Belt, Liquid Rainbow, Gibbering Gemstone, Leoric’s Shinbone, the crafting plans, and a 50,000 gold crafting fee. Additionally, the item can be “leveled up” per difficulty by finding the plans for that difficulty, using a created staff from the weaker difficulty, and paying the crafting cost to create the “leveled up” version of the staff.

List of requirements for the staff and its upgrades:

The total cost to craft the final version, the Infernal Staff of
Herding, is 1,750,000 gold.

It has also been confirmed that the staff is used to get to the secret level.