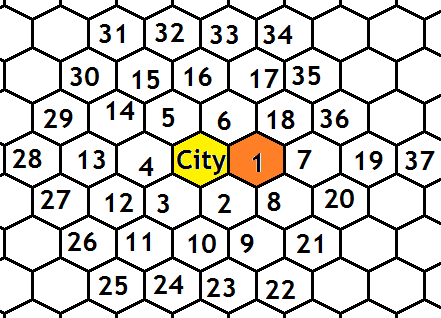 So for the purpose of this question, let’s ignore terrain. Pretend every hex is the same. Obviously during an actual game we’d want to modify this based on the terrain (and impassable terrain might make it more difficult).

What order should one build boroughs in to achieve maximum # of Level 2 districts, and exploit
the maximum number of hexes. In the reference photo, if I’ve built 1 borough already at 1, building the second at 3, 4, 5, or 7 will add three more exploits, but 2 and 6 will only add two.

I think Level 2 districts is more important than exploits.

If the only thing you care about is level 2 districts then your layout should tend towards being a flat edged shape with as few corners as possible, which will cause every district within the shape except for those in the corners to be level 2. Ultimately, a complete triangle or quadrilateral is most efficient as all but 3 (or 4) of the boroughs will have levelled up.

First, we build in position 2, creating the first triangle, which doesn’t achieve anything (yet). If you now build 3 and 6 this will cause the city centre to level up (5 districts is the minimum to level up your first district, since one of them has to touch the other 4 to do so). Next build 8, which completes the triangle and causes positions 1 and 2 to level up. We now have 6 districts, with 3 of them levelled up. 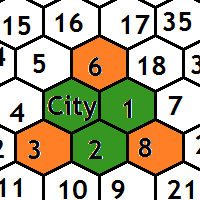 In these images I’m using green for level 2 districts, orange for lvl 1.

If we now extend one edge of the triangle with another triangle, building 10, 9 and 23, this gives us a parallelogram. This causes 10 and 9 to level up, giving 9 cities with 5 levelled up. 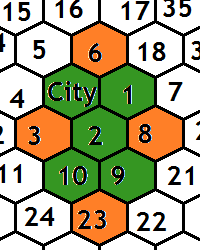 Repeat with another edge, building 4, 5 and 15 to give a trapezium. This causes 3 to level up as soon as you build 4, with 4 and 5 then levelling up when you complete 15. You now have 12 districts with 8 levelled up. 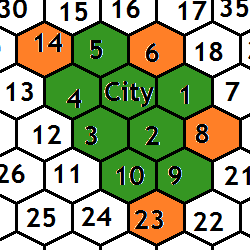 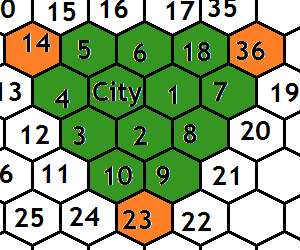 While expanding you could, if you prefer, simply keep adding rows to the triangle instead of expanding in the manner above. This is actually slightly more efficient (by at most one borough) at some stages when half-finished but the end results are the same.