Carefully planning your base’s layout will lead to significant savings and bonuses. What goal should I have in mind when expanding my base? A perfect layout would be the one that wastes as little as possible and creates as many bonuses as possible.

I would recommend dedicated the entire right side of your base to laboratories and workshops, save for 1 or 2 rooms, which you will need for facilities that get no adjacency bonuses.

You will need to build 6 facilities that get no adjacency bonuses (Officer Training, Alien Containment, Foundry, Psionic Labs and 2 plot facilities which cannot later be removed or moved), and 2 square blocks of 4: 2 Satellite Uplink + 2 Satellite Nexus for a total of 16 satellites (which is exactly the number of satellites you need) + 2 Power Generator + Steam Generator + Elerium Generator to power the whole thing (a base with such a layout will produce 107 power and draw 102 power; you can replace the Thermo Generator with an Elerium generator if no steam block is in a suitable location, allowing you to drop 1 Power Generator and placing one of the non-adjacent facilities there, freeing up a slot in the right wing for another lab/workshop).

You can shuffle the blocks around, what’s important is that you don’t put facilities that get no adjacency bonuses in such a place that it will block bonuses for facilities that do

Should you ever become rich like Scrooge, you can remove 1 Power and 1 Thermo Generators and build a second Elerium Generator, allowing you to move 1 facility that get no adjacency bonuses from the right side to the left side.

Note that the laboratories have been replaced with workshops – by this point you will likely have researched everything there is to research. You may also wish to demolish Alien Containment after interrogating every type of enemy, as doing so will turn surplus live aliens into useful corpses, allowing you to stun aliens for their enemies without sacrificing the body count, as well as free up a slot for a facility that doesn’t have adjacency bonuses. 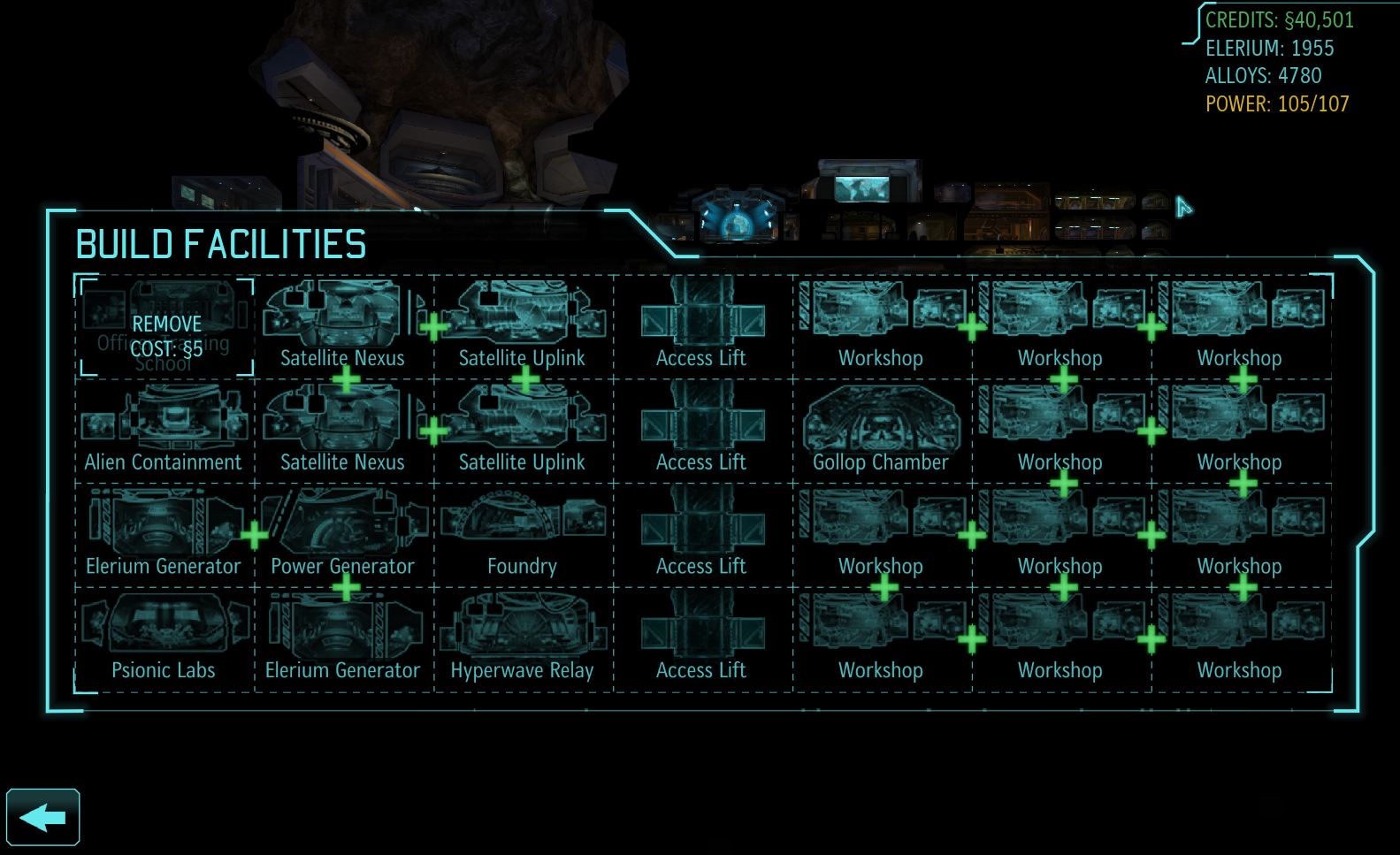 Proof of concept screenshot. Note my improper placement of plot facility 2 – it should be in a corner. Also note how blocks have been shuffled around to accommodate various demands over the base’s lifetime.

The expansion introduces some new factors, but the situation remains largely unchanged: The Genetics Lab counts as a laboratory and the Cybernetics Lab counts as a workshop for adjacency bonuses, so you can build them as you would build laboratories and workshops above (make sure to fit the Gene lab in a corner if you’re going to replace the laboratories with workshops later). The foundry has also been given workshop adjacency bonuses, so you can move it out of the laboratory block to the workshop block for some increased efficiency.