Arcadia, the alchemist in Solitude sold me this: 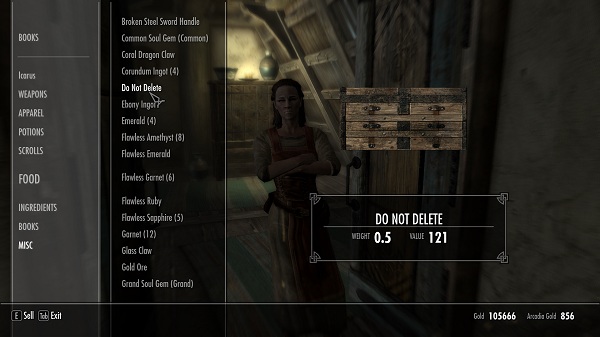 Is this an actual item or a bug?

In TES games the store works by having a chest under the floor, it’s why you can pickpocket money you invested back without taking it actually from the shop. If taken it may break the shop and crash the game when you ask to see [the merchant’s items].

Do not take it! I saw another post on this and the explanation was it is a glitch. Something about how it is actually the chest the game used to store the shop’s loot (usually hidden). Taking it is supposedly a game breaker.

This is because their on-person inventory does not correlate with their shop inventory, apparently it gets added to both.

Superduper game breaking spoiler about console commands: tcl inside a shop’s cell, there’s always a chest with the shops inventory under the floor you can take from. That’s how Bethesda makes shops work and why pickpocketing the gold back does not effect the shop. Obviously world-event shops don’t work this way. IIRC it was like this in Oblivion as well. ALSO: when it says Do Not Delete, do not… take that chest. Badbadbadbad.

The Do Not Delete usually appears as a chest outside the bounds of the normal map in numerous shops across Skyrim. There are actually four different types of the item in the game, and based on their editor IDs, they may have something to do with the Thieves Guild.

They do not have any physics applied to them which means that they will simply float wherever dropped.

This item is occasionally sold by merchants, but it appears that it shouldn’t be.
If the player buys one, it is recommended that they reload from before buying it, or if not, at least sell it back to the merchant they got it from.

from: UESP wiki, “Do Not Delete” article

Do Not Delete is a treasure chest, involved in a bug.

“Do Not Delete” is a scripted placeholder left in-game by developers to represent the total gold-value merchants can hold. Its presence explains why gold can be pickpocketed from merchants, without their total gold value depleting.

It appears as a tiny version of a wooden chest. It has no base value or any notable uses and a weight of 0.5. It is possible to come across it while clearing dungeons. It can be dropped or placed into a chest for safe keeping and appears as stolen when kept safe in a normal chest. It cannot be bought back after 24 hours in game time. It can also be used to reach otherwise inaccessible places in the game, as it floats in place when dropped.

When placed, the rotation of the player is related to how the chest is
placed. Looking parallel to the entrance of the room usually results
in a completely level box. However, looking perpendicular to the
entrance can place the box on its side.

The stolen tag can be removed by placing it in an empty chest, then
instructing a follower search the chest.

“Do Not Delete” chests can only stack in groups of 11. Once a twelfth
chest is picked up, it begins a new stack.

from: The Elder Scrolls Wiki (wikia), “Do Not Delete” article