In single player Survival mode in Minecraft Alpha, what is the safest way to create an obsidian farm? I’ve come across naturally occurring in obsidian in Survival MP, but that was easy to mine because there’s no damage, so I could safely hack away while I was on fire. I’m kind of paranoid about working with lava in single player though.

What will I need to do this? How can I do it without being reduced to a digital pile of ashes and tears?

You should try setting up an obsidian farm! It requires at least one bucket, but will go faster the more buckets you have. Consider the following picture: 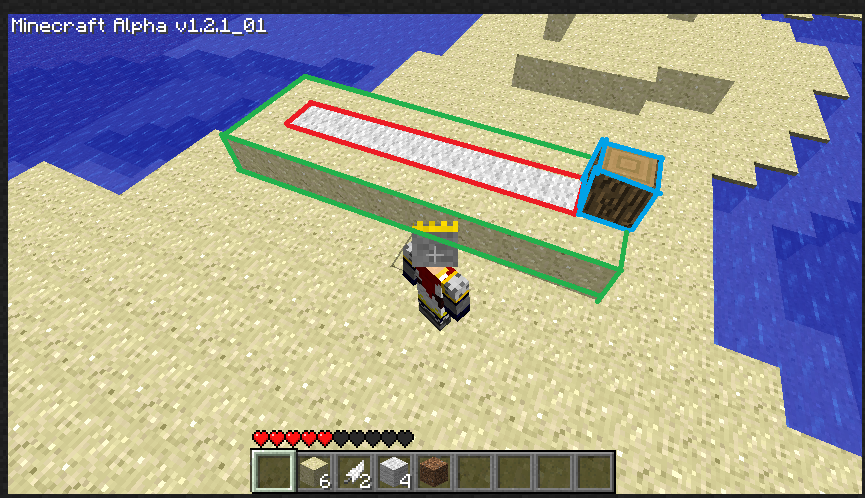 Surround a 1×7 trough with some safe blocks. It doesn’t matter what it’s made of, as long as the blocks won’t burn away (so avoid wood, cloth, etc). This is the object outlined in green below.

Now you should have a 1×7 depression — you want to put lava blocks into this. Be careful when emptying your lavabuckets, because if you try to place a lava source block on top of another lava source block you’ll empty your bucket, losing the lava. I didn’t have lava accessible, so for the picture I used cloth. It is outlined in Red.

After you’ve got your seven lava blocks, simply place a water block on the rim of trough, indicated by the light blue outlined wood block in the picture. The water will flow over each of the seven lava blocks, turning them into obsidian.

This is known colloquially as “obsidian farming”.