From whose perspective is the opening movie in Dead Island?

You meet the four playable characters through the course of the drunken shenanigans, so who is this guy?

You can see the person in the intro for a moment in the bathroom mirror, I’ve taken a few screenshots:

Considering that the characters seem to retain their clothes and general look from the intro, it doesn’t appear to be Ryder White since Ryder’s apparel has a button-down military style shirt and intro guy just has a tan collared shirt on. Example: 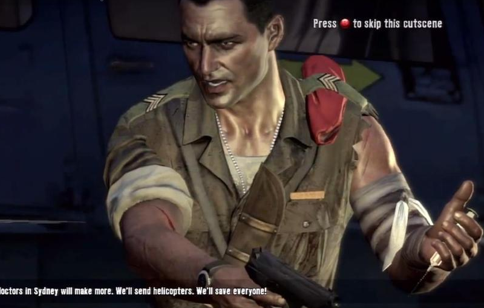 It’s hard to tell from screenshots but their hairstyle and facial hair seem different as well, Ryder has very short hair and no facial hair while intro guy seems to have slightly longer hair and a goatee.

At this point intro guy seems to be a throwaway character to introduce everyone else. It’s possible that he’ll show up in DLC at a later time but the only DLC I’ve heard of is Ryder-centric.