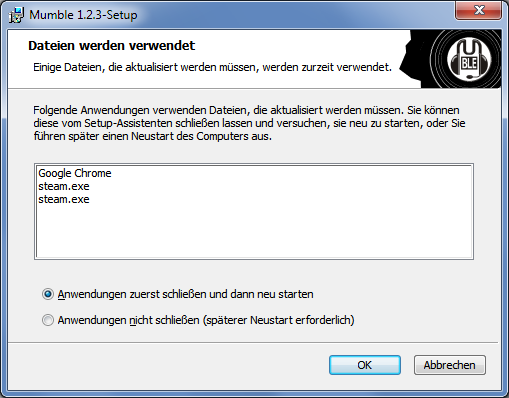 Why does Mumble require me to close Steam or Chrome on Setup?

What does it change within Steam that makes it necessary and why does it touch it at all?

If you have Mumbles overlay enabled and Mumble running, it will inject into any applications using Direct3D (DirectX). In this case, this seemingly happened to chrome.exe and steam.exe.

As the overlay DLL is updated the injected code should be invalidated/dropped, thus the installer lists these applications and informs that they should be closed.

As the overlays in-memory information structure may change between versions and as that information is shared system-wide (shared memory) using both “old” injected code as well as “new” injected code (previous vs. current Mumble overlay DLL version) is discouraged – and thus the applications should be closed.

In the current code-base of Mumble steam.exe as well as chrome is blacklisted (since 2012/2011). I would guess you still use a very outdated version of the default blacklist. In Mumbles settings you can use restore to default to set the new defaults as your current blacklist.