Why are these directions required? Do some games actually run instructions that would be interrupted if the player just hits the power button?

Note I’m not looking for speculation, but rather a technical distinction between what would happen when the user holds down reset then power vs. just when the power button is struck. 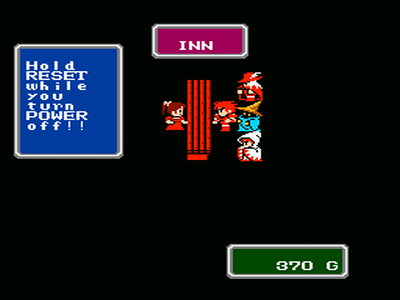 After Googling for a while, I unfortunately couldn’t turn up any specific answer. The only thing we know for certain, is that holding RESET was required for pretty much every game that offered a battery-backed saving mechanism, as opposed to password-based savegames.

The answers I found included:

The reason why this was required on the NES and not on newer consoles, was because the NES was never designed for saving data in the first place. The first game to have supported saving onto the cartridge directly was The Legend of Zelda which was released 3 years after the original Famicom, and 1 year after the NES. Back then, data loss didn’t matter because data wasn’t supposed to be persistent anyways.